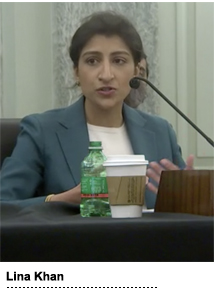 Antitrust expert and legal scholar Lina Khan embodied the phrase “speak softly and carry a big stick” as she testified at her confirmation hearing on Wednesday for a spot on the Federal Trade Commission (FTC).

Although some senators questioned her lack of experience, the 32-year-old Khan is a celebrity in legal circles.

She rose to prominence while still a law student at Yale when she published a now highly influential article on “Amazon’s Antitrust Paradox.”

Khan was nominated for the post by President Joe Biden in March. If confirmed, she would replace former chairman Joseph Simons, a Republican, who announced his resignation at the start of the year.

But the FTC would still need one more commissioner to be at full steam. Democratic FTC Commissioner Rohit Chopra is Biden’s pick to lead the Consumer Financial Protection Bureau. Chopra’s confirmation is on ice, though, until his FTC replacement can be found so as to avoid the party-line deadlock that would result if he left too soon.

At her confirmation hearing, Khan was questioned on topics from the impact that large technology platforms have on local journalism to the FTC’s Facebook case.

Here’s what she had to say.

On local journalism’s dependence on a “few gatekeepers”

“Increasingly, news publishers are dependent on a few gatekeepers to disseminate their news. … A single change in an algorithm can plummet readership and subscriptions for any publisher.

“There are also serious concerns about concentration within the digital ad market as well as vertical integration that has potentially created some conflicts of interest. Some of the lawsuits that were filed last year underscore these issues as well as potential criminal activity.”

“Everything needs to be on the table. Obviously, local journalism is in crisis and I think the current COVID moment has really underscored the deep democratic emergency that is resulting when we don’t have reliable sources of local news.”

“In [my] Amazon article, I identified two potential pathways forward when thinking about these dominant digital platforms. One is enforcing competition laws and ensuring that these markets are competitive.

“And the other is, if we instead recognize that perhaps there are certain economies of scale [and] network externalities that are going to lead these markets to stay dominated by a very few number of companies, then we need to apply a different set of rules. We have a long legal tradition of thinking about what type of checks we can apply when you actually have a lot of concentration, and common carriage is one of those tools.

“Fundamentally, we need to choose one of these paradigms, and proceed accordingly.”

“Over the last few years in particular, there’s been a lot of evidence that’s come to light that suggests, in certain cases, there were missed opportunities for enforcement actions

“Part of that was due to some of the information asymmetries [and] part was also because there was an assumption that digital markets in particular are fast-moving and so we don’t need to be concerned about potential concentration in these markets, because any exercise of power will get disciplined by entry and by new competition.

“Now, of course, we know that in these markets you actually have significant network externalities and other reinforcing advantages of data in ways that make them much more sticky such that we have to be much more vigilant relating to these acquisitions.”

On why it’s tough enforcing against big tech

“One of the challenges is just the deep information asymmetries that exist between some of these firms and enforcers and regulators. It’s clear that in some instances the agencies have been a little slow to catch up to the underlying business realities and the empirical realities of how these markets work.

“Ensuring that the agencies are doing everything they can to keep pace is going to be important.”