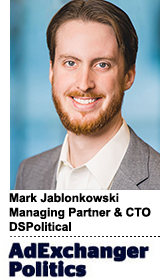 Twitter CEO Jack Dorsey recently announced that his social media platform would no longer allow political advertising. It was a move cheered on by prominent Democrats from Hillary Clinton to Pete Buttigieg and others.

I lead a Democratic technology firm that helps campaigns reach voters, but I believe party leaders are missing the mark entirely.

Don’t get me wrong, there are real problems with political digital advertising, but banning this sort of communication is not the answer. In fact, it sets a horrible precedent for other platforms and diminishes the need to respond to several issues plaguing politics online.

The decision was a headline-grabbing publicity stunt that used Facebook’s wrong-headed policy of allowing demonstrably false political ads as cover for its own failings. Twitter will not be losing much money either since few political dollars actually find their way to the platform.

The company deserves no pats on the back until it adequately addresses the epidemic of misinformation networks, foreign influence campaigns, politically motivated bots and threatening hate speech that pervades its platform of more than 120 million daily users.

For better or worse, political advertising is one of the major ways in which many Americans learn about candidates and election issues. Digital advertising allows for precise targeting, so voters see ads that are relevant to the issues they care about and the community where they live.

Declaring certain platforms off-limits for political advertising doesn’t help voters – it helps candidates with baked-in advantages. Incumbent elected officials who already have large followings, secured organically or previously paid for, will have a leg up on the competition.

Limiting the ability of average Americans to grow their online followings could discourage them from seeking public office. Conversely, it could encourage those who already have large followings to throw their hats in the ring – billionaire reality television stars, for example.

Any action that limits the ability of candidates to communicate with their constituents strengthens the power of incumbency, making it far more difficult for those challenging existing power structures to succeed.

We should definitely hold Twitter, Facebook, Google and other major players in the advertising space accountable, but we cannot expect them to solve all the problems candidates face while reaching voters online.

Russian interference in the 2016 election shook our democracy to its core, exposing a systemic lack of transparency and glaring weaknesses in the way we regulate paid online political communications. Efforts to meaningfully address these deficiencies have stalled or failed.

In the absence of doing something smart at the federal level, states have pursued a patchwork of markedly different regulations that make nationwide compliance impossible and hamper the ability of some candidates to reach their voters.

Looking back on it, it is no surprise that Russia found it easy to disrupt our elections. Our current accountability system for political advertising is largely opaque, ineffective and easily subverted by bad actors.

It is easy and somewhat satisfying to blame the Russians, but the truth is that they are just one of many predatory forces exploiting a broken system, and these issues will continue to reverberate with far-reaching ramifications for the 2020 elections if not addressed soon.

Since federal regulators are gridlocked by political dysfunction and unable to enforce simple rules or issue clear and timely directives, individual states and major digital advertising platforms have attempted to fill the void.

Well-intentioned as they may have been, these regulations have proven so restrictive and so hard to implement from a technical perspective, that some candidates have been rendered unable to advertise online altogether.

The piecemeal regulatory framework that has emerged is having a chilling effect on our political discourse. It is bad for our democracy and represents a giant step backward. Twitter’s decision this week will make these serious problems even worse.

In his tweet announcing the change in company advertising policy, Dorsey naively claimed that the following enjoyed by politicians on Twitter should be “earned not paid.” By ignoring the reality that some candidates begin their endeavors with significant followings because of their celebrity or paid endeavors unrelated to politics, Dorsey betrays how little thought went into his announcement in the first place.

These problems cannot be solved in 140 characters.

By silencing candidates and causes rather than addressing legitimate concerns about Twitter’s damaging impact on our political discourse, Dorsey is only making things worse. Wittingly or not, Democrats who applaud his announcement are doing the same thing.