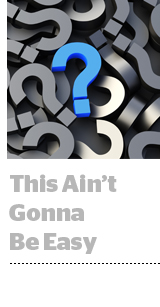 Jack Dorsey was clearly enjoying himself when we tweeted at the end of October about Twitter’s plan to ban political advertising on the platform.

But Twitter released its guidelines on Friday for what that will mean in practice, and although Twitter’s policy, which is set to go into effect on Nov. 22, does what it can to define and set restrictions for political and cause-based ads, Twitter acknowledges that the lines are fuzzy.

“We tried to make this policy as clear and straightforward as possible,” said Del Harvey, Twitter’s VP of trust and safety told reporters on a press call Friday. “But some areas will be more subjective.”

Ads that reference political content, including solicitations for financial support and appeals for votes, are not allowed, although Dorsey previously noted that general “Get out the vote”-style ads won’t be affected by the policy.

News publishers are allowed to run ads to promote their content as long as it’s not an opinion piece or a political endorsement.

Cause-based or issue ads are allowed, but with certain restrictions. Advertisers who want to run an issue ad – such as an ad to raise awareness about the environment or a call for action on social equity causes – have to go through a certification process.

Enforcing these bans and restrictions is going to be a hair-raising process dense with edge cases. Just look at all Twitter’s work tamping down on hate speech, bullying and other unfortunate content on its platform.

Can an advertiser that’s been approved to run an issue ad link to a landing page tied to an entity covered under the political content policy? Nope.

Can a news publisher promote something that casts President Trump in a negative light? As long as it’s a factual piece of reporting and not advocacy against the Republican party, then yep.

Harvey didn’t have a lot of details to share on exactly how the policy is going to be implemented from a technical perspective, although she did note that Twitter will use a combination of human manual review and automation to try and stop people from circumventing the policy.

In the meantime, though, Twitter is going to lean heavily on users to call out problematic ads that slip through the system.

“We have a very straightforward process for reporting ads that violate our policies, and we will also be pretty explicit about ways people can flag what they believe to be violations,” Harvey said.

But there are going to be slipups, she said, no doubt about it.

“We are absolutely going to make mistakes here,” Harvey said. “But we firmly believe it is far better for us to start trying to get this right and give people a way to tell us when we’re getting it wrong, than to wait until we have a full solution for every potential way people can try to game this.”