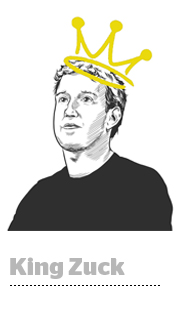 Mark Zuckerberg has four top priorities for Facebook in the year ahead – but stepping down as chairman of the board ain’t one of them.

At Facebook’s annual stockholders meeting on Thursday, numerous resolutions to create a check on Zuckerberg’s power – he simultaneously serves as chair of the board and CEO – were vetoed, as expected.

Although Zuckerberg owns a minority of Facebook shares, the company’s dual class voting structure gives him majority voting power on any board motion, in addition to the power he wields as CEO.

But despite two solid years of scandals, Facebook’s business is still growing.

Facebook raked in $14.9 billion in revenue last quarter, a 26% increase year over year – and its stock actually went up based on the news that it’s setting aside $3 billion to settle a forthcoming Federal Trade Commission fine. Investors were actually relieved at the sum, which to Facebook would be nothing more than a flesh wound.

Zuckerberg shared a few remarks on his objectives for 2019: tackling thorny social issues like hate speech, content and safety; delivering new products and experiences; continuing to focus on the needs of small and medium-sized businesses around the world; and being more transparent about the reasoning behind why Facebook makes certain decisions.

The Zuck also reiterated one of his new favorite talking points: that it shouldn’t be up to Facebook to make wide-ranging judgements on vital topics such as what constitutes free speech and ensuring the sanctity of elections.

“The big question we need to answer is, what is the right framework, whether that’s regulation or industry bodies, that will enable us to solve the specific issues we’re grappling with,” Zuckerberg said. “If the rules of the internet were getting rewritten from scratch today, I don’t think most people would want private companies to make so many decisions by themselves.”

With that sentiment in mind, an attendee asked if Mark would be willing to give up some of his voting power.

Zuckerberg launched into a several-minutes-long monologue on the need for regulation and how Facebook is grappling with its many social responsibilities.

After listening politely, Zuckerberg’s questioner asked one more time: Yes, but are you willing to step down from the chairman role and cede some of your super voting shares?

But she was quickly ushered away from the mic. Sorry, only one question per person, whether you get an answer or not.