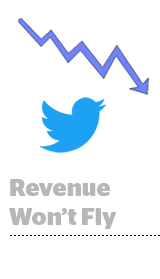 Ad revenue was down year over year for Donald Trump’s favorite communication channel.

Growth has a ceiling. Facebook, for example, acknowledged that ad load is about to max out on its platform.

But with ad revenue on the decline at Twitter, the platform needs a growth plan more than ever.

CFO Anthony Noto, who also took the reins as COO after Adam Bain’s departure last year, warned investors that ad revenue will continue to lag due to the sales cycle – Twitter is chasing brand dollars – and could be further affected by growing competition.

“There are more large-scale players in digital advertising and social advertising budgets now than in prior years [and] that’s only increased throughout 2016,” Noto said. “We’re focused on other streams that are not ad-driven and areas of low-hanging opportunity where we have audiences that aren’t being monetized.”

Live video, for example, will continue to be a big area of investment in 2017. Video provides the dual benefit of getting more content on the platform and driving revenue through products like Twitter Amplify, Noto said.

But other investments are dragging. The TellApart acquisition isn’t pulling its weight. Twitter bought the retailer-focused digital ad platform in April 2015 for just over $532 million in stock.

Although Twitter claims to have made good gains in revenue from the Twitter Audience Platform and Amplify, that upside was offset by “significant year-over-year declines in revenue from TellApart.” Twitter said it expects contributions from non-owned-and-operated ad revenue to face significant headwinds this year from “factors impacting TellApart.”

In the fourth quarter of 2014, Twitter ran a limited pilot around the Dynamic Ads product it built using the technology it acquired from TellApart, but other than that, there hasn’t been much news about it.

TellApart co-founder Josh McFarland, who joined Twitter following the acquisition, left in December, one of many high-level execs who have exited the company over the past year.

Although “significant resources” were allocated to some DR products, they “haven’t gotten to the point where we can launch them and we need to rethink about those resources and that level of investment and whether we should reallocate,” said Noto, although it’s unclear if he was referring specifically to TellApart.

Twitter has been going through an overall streamlining process recently. In January, Twitter sold its app developer platform, Fabric, to Google, as a way to slim down and focus on its core use case, Noto said.

Twitter is gunning for profitability, and the Fabric business was a large investment that didn’t provide value, he said.

Despite monthly active user (MAU) and ad revenue stagnation, daily active usage was a bright spot in Q4, up 11% year over year and growing consecutively for the last three quarters. Tweet impressions and time spent also showed double-digit YoY growth, although Twitter declined to share any concrete numbers on DAUs or time spent.

MAUs, with which Twitter has struggled quarter after quarter, were nearly flat. Total MAUs for Q4 grew by just 2 million between last quarter and this quarter to 319 million.

As for a Trump bump in users or engagement due to the president’s active use of the platform, Twitter said it can’t see any quantifiable effect now.

According to Noto, monthly impressions on Twitter total in the tens of billions, so any one person or event, even as big as a president or presidential debate, wouldn’t necessarily make a material mark on overall engagement. Twitter, however, said it will continue to monitor engagement for quantifiable trends.