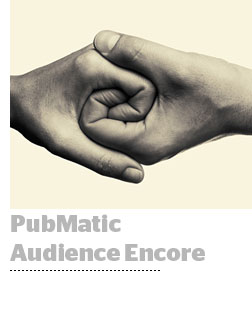 PubMatic Audience Encore lets publishers set up a private marketplace (deal ID) with buyers that includes their audience data. Buyers can then target the audience segment both on that publisher’s site and across the open web. The deal ID approach gives publishers more control, better match rates and protects them from data leakage, said PubMatic VP of audience solutions Alex DeSanctis.

Audience Encore also offers publishers an alternative to selling their valuable audience data in a third-party marketplace or a DSP’s data marketplace.

Publishers using Audience Encore can monitor performance and how buyers are using their data in real time, and they can benchmark advertisers’ use of their data compared to their own. This method gives both sides more control and transparency than they would with other data sharing methods, DeSanctis said.

When PubMatic started beta testing Audience Encore last summer, its use among publishers increased 1,000%, and DeSanctis expects it to be its fastest-growing business in 2020. During the beta period, PubMatic signed on sellers including Audigent, InvestingChannel and H Code.

National CineMedia, which sells most of the pre-show movie theater ads in the United States and owns its own movie-related websites, started testing Audience Encore in Q4. Before, its data was only available via managed service.

But with Audience Encore, buyers can use their own DSP to buy National CineMedia’s five key segments: frequent moviegoers, occasional moviegoers, fanboys, family moviegoers and the total moviegoing audience. They can also buy these audiences across PubMatic’s entire exchange, including formats such as mobile, video and OTT ads.

Here’s how it works. National CineMedia syndicates segments it stores in its DMP to PubMatic, which matches them to its own cookies and mobile IDs. Buyers pay an additional CPM fee to use the data.

Because National CineMedia is jointly owned by the largest movie theater chains, its data on 130 million moviegoers comes directly from the source – which is why it’s reluctant to share its data with buyers directly.

“We wanted to work with an SSP that allows us to activate our audience, but in a way where we can continue to build upon the data,” said Lara Mehanna, VP of digital strategy at the cinema advertising firm. If National CineMedia simply syndicated its data, it would lose control over how it was used.

In building Audience Encore, PubMatic wants to offer another way for buyers and sellers to share their data beyond DSPs’ data marketplaces or via DMPs. PubMatic works with more than 100 DSPs, DeSanctis said, so it’s easier for publishers to create dealIDs within its exchange instead of exponentially more DSPs.

There’s one rub: Audience Encore requires cookies and device IDs to work, so its utility in its current form is possibly fleeting. But PubMatic plans to evolve the solution as replacements for third-party cookies emerge. “We are at the forefront of the identity conversation with our product Identity Hub, that will facilitate targeting in the post-cookie world. In the meantime, we’re transacting on device IDs and cookies.”