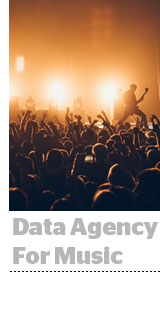 The music industry is coming to ad tech.

Behavioral and affinity data about music artists can create valuable targeting information for the right advertising campaign. Imagine being able to target people who have visited a hip-hop artist’s tour site or watched an artist’s YouTube video.

To accelerate their vision, Audigent raised a $6.7 million Series A funding in November, with backers from the music industry, including the Warner Music Group as well as record executive and Taylor Swift’s latest punching bag Scooter Braun. Founded in 2015, the company first built the platform, then started recording revenue last year, Stein said.

The founders reflect a mix of music executives and ad tech execs coming together. Stein founded the recently-shuttered video SSP DashBid. That company “struggled to make it through the transition when verification platforms were turned on,” Stein said – one reason why Audigent focused heavily on clean data from the outset, he added.

And Brater founded the music label Rawkus Records – which worked with artists such as Eminem and Talib Kweli before selling to Universal Music Group – and later founded musical publication Uproxx. He also founded and sold a YouTube multi-channel network.

Audigent has access to the first-party data of artists on Warner Music Group and Uproxx, president Jake Abraham said. It also gets data from sources beyond the music industry, such as Condé Nast, Trusted Media Brands, Barclays Center, the Brooklyn Nets and two of Comcast Spectator’s esports leagues. They pixel their sites for Audigent, and some use custom URL trackers to share links. “We represent their data,” Abraham said, and pay the publishers or sites’ owners a rev share when their data is used.

Grain Group used Audigent for six brands over the past year. Audigent can provide granular information about what music, sports or entertainment preferences a brand’s customers have, which inform its broader media strategy. Some of these insights can be applied outside Audigent, like for branded content or social media campaigns.

“Not a lot of programmatic managed services partners out there have insights that are actually interesting to our clients,” said Grain Group founding partner Ben Jurist.

Audigent is now pitching a service called “smart PMPs,” where it takes a more active role managing publishers where its clients’ ads appear. For instance, Audigent will go into an SSP like PubMatic and turn on or off publishers at the URL level to optimize campaigns, Abraham said. It can also forecast more precisely the availability of a brand’s narrow target audience, a feature Grain Group finds valuable.

Though many agencies have soured on using outside trading desks because they’ve been burned by hidden fees, Jurist said that Audigent bucks that trend. It can log in to Audigent’s platform and knows where its clients’ media runs.

And Grain Group freely receives insights about its clients’ audiences pre- and post-campaign, which they highly value to make more intelligent decisions about the size of their target audience and what they like. “There’s been exceptional transparency from the team which we haven’t gotten from other places,” Jurist said.

As Audigent forges ahead with its Series A funding, it wants to move beyond its roots in music, sports and entertainment data to appeal to an even broader array of buyers. Some clients value not what a person watched, but the fact that a person will watch videos on Facebook and mobile apps but not YouTube, for example. Details about where people watch video can make for smarter video ad buys, Abraham said.

Although data aggregation and profiling is in jeopardy as cookies disappear from browsers, Audigent sees opportunity in tracking data where it remains instead of relying only on social media. “If you’re stuck always renting that audience from the social network, you’ll never get out from under that,” Abraham said – a pitch that he sees resonating with its customers.