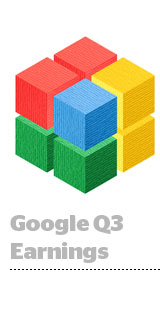 Although Alphabet’s revenue grew 21% to $33.7 billion in Q3, that fell short of its target, sending its stock sliding 4.5% in after-hours trading Thursday.

“We feel good about the underlying strength in the ads business,” said Google CFO Ruth Porat, noting that Google is investing in machine learning to further improve its ads business and make it drive better results for advertisers.

Revenue for publishers who are Google Network Members increased 13% to $4.9 billion, “reflecting ongoing momentum of AdMob and programmatic,” Porat said.

Google paid 70% of that $4.9 billion to publishers, compared to 71% at the same time last year. CPMs rose 11% year over year, but overall inventory was flat. Impressions declined 1% from the prior year and 1% from the prior quarter.

Daily active users of Google Home quintupled from last year. The company also highlighted the capabilities – and security features – of the Pixel 3 phone.

Speaking more broadly about Google Cloud, Waymo and YouTube, Pichai said Google focuses on creating a compelling experience for users before trying to monetize that experience.

“We take a very long-term view. We invest to get the user experience right, and we are confident that when we do that, the value will follow,” he said.

Improving the news experience on YouTube to more prominently surface credible news sources was a “big priority” for Google.

On the advertiser side, an investor asked if the YouTube product announcements made during Advertising Week reflected an increased focus on direct response instead of branding on YouTube. The new ads allow users to download an app, book a trip or check movie showtimes within or as part of the ad.

“We have always felt that direct response was something that could work on YouTube, and our instinct is bearing this out,” Pichai said.

Google created a line item for its European Commission fines in its earnings report. Those fines totaled $5.1 billion this quarter for violating antitrust rules and $2.7 billion in Q2 for prioritizing its own shopping tools. But it’s paying far less in taxes, with an effective tax rate of 9%, down from 16% the prior year, and it’s appealing both European Commission rulings.