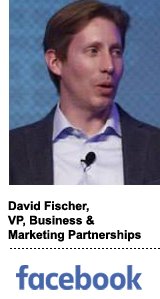 Most consumers are only just learning about the inner workings of the ad-supported internet – and they don’t like what they see.

“A lot of the discomfort people have is when they feel like they don’t actually know what’s going on with the ad system,” Fischer told AdExchanger. “That can make people nervous.”

That nervousness is manifested in the dogged notion that Facebook sells data. It doesn’t. But the nuance – that Facebook profits off advertisers using its data to target ads rather than selling data outright – almost doesn’t matter.

What does matter is that Facebook is far from the only company collecting data on people as they trip around the web. Facebook deserves the hot seat it’s sitting in right now, but ignoring Google, Amazon, Twitter et al. ignores reality.

Facebook made that point, somewhat testily, in a blog post Monday, noting that it’s not alone in collecting data from users and non-users alike.

But, regardless of what others do, Facebook must mind its own store and take it on the chin.

“The more that we can effectively communicate about what we do, what we don’t do and the types of regulation and legislation we think would be helpful out there – that level of transparency and accountability can only help,” Fischer said. “Not just for us, but for the industry as a whole.”

AdExchanger met with Fischer at Facebook in Menlo Park.

AdExchanger: Facebook is in a category of its own in terms of scale, but your business model isn’t actually unique. Does it strike you that Facebook is the only one really getting hammered?

DAVID FISCHER: Is that a yes or no question? Let me try to say it like this: We have a responsibility to create an environment on our platform that people feel comfortable in and where they feel like the information they share with us is used responsibly and effectively. We take that responsibility incredibly seriously, regardless of what anyone else does.

Frankly, some of the questions we’re getting are just to understand how our platform works, how the information gets used or, in some cases, doesn’t get used. We need to do a better job of explaining and clarifying.

What misconceptions keep cropping up about Facebook’s business model?

The No. 1 misperception we hear is around how we use information. We get a lot of questions about whether we sell data. We do not sell data, period. We create opportunities for businesses to reach the right audience, but we don’t share information about specific people with an advertiser.

The second is around giving people control over the ads they see. We’ve always focused on providing transparency and control to people and, frankly, I think we’ve done a good job building those controls.

We have done a less good job educating people about the controls they have. I often ask people if they’ve ever clicked on the top right-hand corner of an ad on Facebook to control the information or understand why they’re seeing it. Very rarely do I have someone tell me they have.

We need to better educate people about how our ad system does work so they understand the distinction between showing you well-targeted ads that reflect the things you’re interested in and other information you’ve chosen to share about yourself from the notion of us going out and providing that information to businesses.

Let’s get into data policy. How is it changing and what impact is that having on ad products and targeting?

Our philosophy is that we want people to be in control of the information they share with us. We’re focused on being clear about what information we collect and how we use it to create better experiences for people on our platform.

But if there’s other information that maybe we don’t need, we make a point to not collect that information. That’s one of the things we’re focused on as a company.

How does that change how you do business?

We recognize that we haven’t done a good enough job on a number of fronts. One is ensuring the integrity of information that people share with us. We’ve taken important steps and announced actions around dialing back the information that gets shared. We’ve announced audits as part of our integrity initiative to ensure that even with people’s permission to access data, it’s being used in the intended way.

What isn’t changing is our mission of connecting the world. In terms of our advertising programs, our focus is on enabling businesses to reach the right audience for them and helping them launch, grow and bring new products to market.

But what if people spend less time on Facebook – won’t that impact the amount of data you have access to?

We’ve made a conscious decision to focus less on time spent and more on time well spent. The phrase Mark [Zuckerberg] used when he first talked about this at the beginning of 2018 is “meaningful social interactions.” We’re trying to understand what those are and create more. We’ve all had experiences on Facebook or Instagram or Messenger or wherever that are good, they’re meaningful and they matter to you – and, frankly, we’ve all surely had experiences that don’t.

We want to do more of the former and less of the latter.

But regardless of how meaningful they are, will fewer interactions mean less data?

Rather than more or less data, I think about it as the quality of the experiences themselves. This is distinct from what information is used and more about understanding the types of experiences people value most.

But it’s not as easy as having one nail and one hammer. It’s about figuring this out for each person.

I’m a big sports fan. For me, interactions around sports are really meaningful. But I know lots of people for whom that would be close to meaningless. Other people have other things they care about that I don’t. We need to figure out what those are. That means using the right types of information and figuring out the right signals.