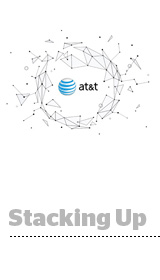 On Friday, AT&T revealed that Brian Lesser, GroupM’s CEO of North America, will helm a new business unit so the telco can attempt to realize the potential of its vast deterministic data set. He’s got his work cut out for him.

When the AT&T/Time Warner mega-merger closes – it’s still pending, but expected to go through under a friendly Federal Communications Commission – AT&T ostensibly gains access to an even more vast, deterministic dataset, including TV access data and internet service provider data with a physical billing address-shaped bow on top.

“This can not only create new revenue streams and business models, but an entirely new scale of business on par with the larger internet service companies,” said Drawbridge CEO Kamakshi Sivaramakrishnan.

But for AT&T to be able to take advantage of all of that data in ways that can rival what Verizon’s cooking up under its hood with AOL and Yahoo, it needs to develop a scaled ad buying and analytics platform.

“Ultimately, the success will be in the execution, which is especially complex in enterprises of these respective sizes,” said Kim Perell, CEO of SingTel-owned Amobee.

AT&T isn’t starting from square one on the ad tech front.

Since 2011, AT&T has been plugging away on AdWorks, its addressable TV unit, through which AT&T claims it can target household-specific TV ads regardless of the program or the time of day in both live and playback modes.

For AT&T to get up to speed, it’ll need to pursue an aggressive roadmap that will likely include a number of new partnerships, some in-house tinkering with tech and perhaps an acquisition or two.

In Sivaramakrishnan’s view, any telco with ambitions in this space knows that the size and sophistication of the competition – the duopoly – calls for the big guns, and she said she wouldn’t be surprised if AT&T bought AI, machine learning and deep learning capabilities to apply against identity, cross-device and advertising.

But does AT&T need its own demand side and supply platforms?

AT&T could acquire DSP and SSP assets from a company like AppNexus, for example – Lesser happens to sit on the AppNexus board – or build its own without too much fuss. Exchange tech is becoming increasingly commoditized.

But while owning tech may make sense for the inventory owner, it creates more walled gardens.

A world in which advertisers “will have to buy Comcast through the Comcast platform, AT&T through the AT&T platform and Amazon through the Amazon platform – I don’t think that’s advantageous for the advertisers to have to go into buying platforms that are native to the environments, rather than being able to buy across those environments,” said Bryan Simkins, partner at programmatic consulting firm Transparent Media Partners.

On the other hand, AT&T could also just as easily partner for those services.

Yet, it’s unlikely AT&T will license its highly valuable data trove, both for reasons of control and privacy.

Having jumped aboard at GroupM in 2007 as part of WPP’s purchase of 24/7 Real Media, where he served as VP of product management, Lesser became the driving force behind the creation of GroupM’s trading desk, Xaxis, which was built off the back of the 24/7 tech.

Before ascending to the North America CEO role, Lesser supervised the rollout of Turbine, a $25 million proprietary data management platform within Xaxis now on offer to GroupM agencies through mPlatform.

But regardless of what AT&T decides to build itself, partner on or buy, it seems clear that the telco is taking a page directly out of the Oath playbook, said LiveIntent COO Dave Helmreich.

“I expect that AT&T, not only with their assets, but under Brian’s leadership, will make the same forward-looking investments in addressability and people-based marketing as Verizon,” Helmreich said. “But bringing all of this under one platform with an assortment of platforms and technology is hard enough in a $4 billion acquisition ­– and now we’re talking about an $84 billion acquisition.”