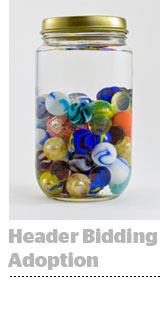 AppNexus and Index Exchange have the broadest adoption of their adapters and wrappers, according to the first-ever Header Bidding Index – a report from ServerBid, an Adzerk spinoff that builds wrappers for the demand side.

Seventy percent of the top 1,000 publishers running programmatic advertising use header bidding, according to the report, which ServerBid created by looking at programmatic publishers in the Alexa top 5,000. It removed companies like Apple and Disney, whose sites aren’t ad-supported.

Of the publishers running header bidding, 44.8% plug into AppNexus as a demand source, and 41.3% use Index Exchange.

Fifty-one percent of publishers with a wrapper use AppNexus’ Prebid. Because it’s open-source, the basic Prebid code might be customized by either another ad tech company or by the publisher that uses it.

Finding these customized code installations took manual work. “You actually have to scour the site individually and look through the different source files,” explained ServerBid marketing director Chris Shuptrine, who created the report.

The popularity of these companies’ wrappers and their adapters are linked, Shuptrine said.

“You don’t have to use AppNexus if you use Prebid, but the code is right there and built. You might as well use it,” he said. “The same is true with Index Exchange being the largest third-party vendor wrapper solution.”

The Header Bidding Index identified over 50 unique wrappers in use, but many of the lesser-known wrappers only had a few publishers using them.

“There is a massive drop-off after No. 13, which is Yieldbot,” Shuptrine said. Fewer than 10% of publishers used Yieldbot.

The steep drop-off in adoption comes from technical limitations around header bidding. Publishers adding too many vendors will introduce latency or complexity that can affect revenue.

ServerBid plans to track changes in header bidding adoption monthly. But the index has one blind spot: It can’t see server-side header bidding, because tags reside on a server, not the publisher’s page. And in the future, many publishers expect to move server-side.

“We won’t ever be able to track what happens on a server-side call,” Shuptrine said, though the index can detect the presence of a server-side solution tag, like Media.net, which appeared on 1% of publisher pages.

That blind spot includes if a publisher is testing Amazon’s Transparent Ad Marketplace. “Right now we haven’t found any indication of a difference is a publisher is using Amazon TAM or a standard Amazon tag,” Shuptrine acknowledged.