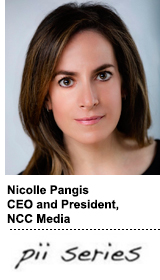 What started with an interest in video production blossomed into a career in programmatic advertising for NCC Media CEO Nicolle Pangis.

To pay off her student loans, Pangis took a job in 1999 at 24/7 Media, a pioneering programmatic ad firm, where she worked in affiliate relations with websites that were part of the ad network.

“I fell in love very quickly,” she said.

After getting an MBA in strategic management in marketing, Pangis went back to 24/7, where she worked in sales, launched a joint technology venture with Dentsu and eventually led global product management.

“I was fortunate that senior people picked me out of places to run things,” she said.

Pangis then moved to GroupM, where she was the CRO and global COO of Xaxis at the height of the agency trading-desk days. She also served as global COO of mPlatform, overseeing data and analytics services at GroupM.

A career in programmatic sparked Pangis’ curiosity about technology and how the guts of it all work – a passion she still explores today as a CEO.

“If something is intriguing but you don’t know how it works, what’s better than figuring it out?” she said. “I’m probably one of the only CEOs that will stand and start writing data infrastructure on a white board.”

AdExchanger: You’ve been in programmatic since the beginning. What’s been your big takeaway on how the industry has evolved?

NICOLLE PANGIS: I don’t think in this industry we have a full appreciation of evolution. We think everything has to be revolutionary. But there’s a lot of power in evolution.

We got sloppy on quality on the digital side. Too many banners on the same page, too much clutter, not enough thought into the consumer experience. The good news is, we realized that and acknowledge it. But programmatic drove some of that. Once a machine and scale got involved, it’s easy to just go.

What frustrates you the most about the ad tech industry?

In some cases, things that we should be paying attention to more quickly, we don’t ­– like the consumer experience in digital. We knew seven ads on a page doesn’t feel right innately. It took us a long time to correct it, longer than it should have. As data-driven television comes to fruition, there’s a lot more attention being paid to that.

What’s been your biggest challenge as a female executive?

There still are a lot of biases. As you move up the ranks, you have to become numb to that.

I realized at some point, I can’t control how people perceive me. I am who I am. I will always be a woman. I will always be 5-foot-2. I will always dress the way I dress. I’m just going to do my job, be effective, build a great team and company with passion, and hopefully everything else falls into place. You have to concentrate on the signal and get rid of the noise. There’s always going to be noise.

How would you rate the advertising industry’s progress on diversity and inclusion?

There’s a lot of lip service paid to diversity. There are all these initiatives, but when companies have an opportunity to elevate women and minorities, I’ve seen them not take it more than they have.

Look at the numbers. Look at women in board seats, in CEO slots. It’s super clear compensation is not in line, and there aren’t enough companies doing the diligence to see if women and minorities are paid equivalently. If not, let’s fix it today. That is taking a stand.

We’re doing an exercise to make sure everyone is paid the way they should be. An outside company is doing the evaluation. So that’s what I mean: You have to do, not just talk.

What advice do you have for someone who wants to become a CEO in this industry?

Being authentic is No. 1. It’s too hard to be anybody but who you are.

And always be vocal about where you want to go. Don’t be scared to assert that direction and don’t wait for somebody to tell you where you should go next. And if there’s a point in your career where you’re not sure, solicit advice. But consistently knowing what your next step might look like is something people are scared to talk about that they shouldn’t be.

Did you always want to be a CEO?

Yes. After I retired wanting to be president of the United States.

I’ve always been very career-minded. I’m the daughter of an immigrant and a guy from the projects in the Bronx, so I think it was my way “making it,” whatever that means. I have two little girls now, seven and four. It became even more important when I had them.

What do you do for fun?

There’s not that much free time between work and the kids. I’m my older daughter’s Girl Scout leader. I’m a distance runner. I’ve run two marathons and 16 half marathons. I might do one more marathon and then I think I’m going to hang my shoes up.