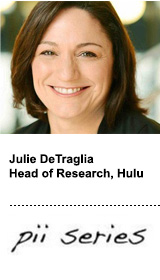 For Julie DeTraglia, what started as an after-school habit watching re-runs of “The Mary Tyler Moore Show,” “Rhoda,” “All in the Family” and “The Carol Burnett Show” turned into a career in network and streaming TV.

“It didn’t take long for me to understand that Hulu is the perfect place for me to have landed,” she said. “I love TV, ad we’re trying to reinvent TV and make it a better experience.”

Part of making TV a better experience comes down to research – analyzing data on what consumers like about the service and what could be better. DeTraglia, who started at Hulu as head of ad sales research in June 2016, spends her days doing exactly that.

“I get to explore viewer behavior in a world where there’s endless amounts of content,” she said. “What emerges when people can watch anything they want, at any time, on any device?”

In January, Hulu consolidated its consumer insights, ad sales and user experience research teams under DeTraglia, expanding her role to head of research. DeTraglia, who had spent the prior 15 years across digital and TV research roles at NBC, was well-suited to the job.

AdExchanger: When did you get interested in the business side of TV?

JULIE DETRAGLIA: In college, I was an English major with a minor in film studies.

I thought I wanted to be in the movie business, so when I got out of school, I worked for an independent film producer in New York. It’s a slow business.

So, I got a job at CBS in affiliate relations. It was a great entry into TV, because it’s the distribution point between the network and the stations that air its shows. We made scheduling decisions and did PR for new show launches.

When did you move over to the research side?

I was there when David Letterman moved to CBS for “The Late Show.” The stations were running off-network sitcoms late night, because CBS didn’t own that time slot. Convincing people to run Letterman required us to use ratings. Our research team would put together analyses on how the shows were doing, projecting how Letterman would do, the kind of money we could make. That was my first exposure to using numbers to tell a story, and I liked it. So, I latched on to research.

Tell me about your career at NBC.

I did NBC’s first acquisition, a network called PAX. I worked on the programming and scheduling side, and the ad sales side.

Then NBC decided to turn what at the time were just websites into a business. This was the dawn of digital. NBC bought iVillage and brought in experts, including Peter Naylor [head of ad sales at Hulu]. It brought this DNA to the company that didn’t exist before. I worked in digital for pretty much the rest of my career at NBC.

I got to work on four Olympics on the digital side and see the consumption change from TV to tons of video online. We used the Olympics as a bellwether because people change their behavior for that event, and we would see it seep into regular media behavior over time.

What’s the most interesting trend you’ve seen in your research?

[Viewing] really has converged. That’s the biggest change — that blur between live and on demand. There are generations now that see a TV screen as a gallery of shows and not a set of networks. I have children and I see that in their behavior. They took to Hulu quickly because that’s the world they live in.

What’s your biggest piece of advice for your employees?

I always hated the term networking, and I hated doing it. But I eventually embraced it, and I think you have to.

It’s about making relationships with people who do the same thing as you do. It helps expand your horizon beyond your current job. You end up being friends with people. Many of my counterparts at other companies [are people] I’ve known for years from being involved in industry initiatives. Someday I’m going to need another job, and I have this network.

Also, the best way to prove yourself is through your work and the way you are with people. You can’t be a jerk and expect to get very far.

What do you do outside of work?

I have three boys, so I spend most of my time on the sidelines of some sports game. My kids and my husband are my favorite people to spend time with. We like to get outside.

We also watch a lot of reality TV. Hulu has like 27 seasons of “Survivor” and they got deep in there.

What’s your favorite show on Hulu?

“Handmaid’s Tale.” And I love “Casual.” I feel like people don’t know about it, but it’s an excellent show. I just started “Castle Rock.” I love all our babies.