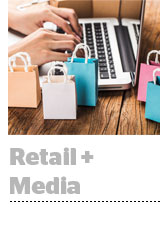 Until recently, each of these assets had its own sales team and unique tech setup, but that’s changing. But Rakuten has recently brought these media assets together under a unified technology approach and a single sales team - all underpinned by Rakuten’s retail data.

The goal is to “bring together our advertising assets into a portfolio, and enable advertisers to leverage the uniqueness of the media inventory and the strength of the tech we’ve built over the year,” said Tony Zito, President of Rakuten Advertising.

By uniting its inventory through a single sales channel, Rakuten also expects to raise awareness about its combination of retail data and media. Other retail media companies also own entertainment-focused media, like Walmart’s Vudu or Amazon’s Freedive and Twitch. Rakuten checks the same box, marrying shopping intent data with high-engagement media.

In addition to moving to a single sales force, all of Rakuten’s media properties will adopt a similar tech infrastructure.

Rakuten built a proprietary header bidding wrapper on top of Prebid that it’s using across desktop and mobile ad inventory. Next, it will add the header bidder to video, Zito said.

As a second step, Rakuten will use an exchange to set up private marketplaces across its media properties which will roll out by mid-year. Target adopted a similar exchange-focused approach for Roundel last June.

“We do own a DSP. But today our strategy is to work with the agency’s existing partners as much as possible,” Zito said. “We don’t want to introduce a fourth or fifth tech that the media buyers needs to leverage. We want to make it easier for them to access inventory.”

Because Rakuten owns these media properties, where it can set first-party cookies, Zito considers the company well-insulated from the coming demise of third-party cookies. “The companies that will survive and thrive will need their own media and their own relationships with consumers,” he said.

Rakuten Advertising spent a year on the project. In February, buyers will be able to work with a single sales point of contact across all of Rakuten’s assets. The unified tech will roll out over the first half of the year. Some media properties are still in beta or alpha trials of the tech, Zito said. By mid-year, Rakuten wants its exchange up and running, which will power its private marketplaces.

“Bringing these assets together in a more consolidated, cohesive way provides a great alternative for brands and agencies to the walled gardens,” Zito said.