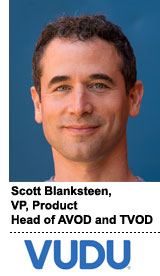 Watch a program on Vudu, and you’ll likely only see ads for products you can buy in a Walmart.

That’s no accident. The Walmart-owned streaming platform uses the retailer’s purchasing data, which brands can use for targeting. They can also serve dynamic product ads, such as a Coke ad for one family and a Diet Coke ad for another. Vudu also knows if someone saw an ad for Pampers, Dawn, Oral-B or Reese’s and then bought the product at Walmart.

“We can put a different creative in front of the right person,” said Scott Blanksteen, Vudu’s VP of product and head of AVOD and TVOD. “Advertisers want to spend their dollars where they can be the most effective, and we can tell them what happened to their sales. That accounts partially for why you will see a lot of endemic CPG and grocery advertisers who sell product at Walmart.”

To use Vudu, people must enter their email address for ad-supported streaming. And they can log in to buy content via their Walmart accounts, further cementing Vudu’s targeting, dynamic creative and attribution capabilities.

Walmart acquired Vudu in 2010. The retailer was a top seller of DVDs and wanted to secure a piece of the on-demand movie rental market. But as content streaming took hold, the company added an ad-supported product three years ago in October 2016.

On the paid, on-demand side of the business, Vudu grows two to three times faster than the rest of the market, Blanksteen said. Users topped 25 million in October 2018. (Vudu declined to provide an updated number.)

But what’s to separate Vudu from everyone else?

To gain more viewers in an increasingly crowded market – including this month’s launch of SVOD service Disney+ – Vudu is positioning itself as the streaming platform for family programming. It’s making Vudu family-friendly by investing in technology that gives parents granular controls to block content they think is inappropriate for their children.

Vudu not only enables a “walled garden” area with kids content, similar to YouTube Kids or Tubi Kids, it goes two steps further.

Second, Vudu allows parents to choose what content they feel comfortable watching with their kids. For example, if parents are fine with some mild language and drinking scenes but not sexual content, Vudu will show an edited version of the movie or show that omits anything racy. This feature launched last month and now totals 800 movies.

“This is not us creating a censored version of the movie,” Blanksteen said. “It broadens the ability for the family to watch more content. They can watch a movie that will automatically and seamlessly skip those one-second to five-second moments where something is inappropriate, and it’s pretty much unnoticeable.”

The focus on making media family-safe harkens back to Walmart’s DNA. Back in the era of CDs and DVDs, Walmart was known for not selling CDs with parental advisory labels and some movies with R ratings. Now it’s passing the content-control reins over to parents.

As more subscription streaming services debut in the next several months, Blanksteen expects a mostly peaceful coexistence. “A large number of Vudu customers today are Netflix subscribers. We see that they’re using both, and for somewhat different things,” he said. “We’ve heard from customers that they’re not going to subscribe to eight services – and that’s where the ad-supported side of our business comes in.”

With both homegrown ad tech, like its ad server, and connections to outside DSPs and DMPs, Vudu’s ad tech is surprisingly developed for a three-year-old platform.

Vudu’s customer data flows into the Walmart Data Platform to deliver better customer experiences and help advertisers. A marketer might want to do broad age and gender targeting, but layer in people who like DC superheroes or fancy sneakers, Blanksteen said.

Most inventory is direct sold, but Vudu allows buyers to execute programmatically if they want to target based on their own DMP data, for example. Vudu built its own ad server years ago because it couldn’t find any that could deliver across all the device types and platforms it needed. That ad server now plugs into mediation layers, including SpotX and AppNexus (now Xandr).

Building on its expertise in ads for grocery items, Vudu is piloting shoppable ads. Since many people log in to Vudu with their Walmart account, the ads allow people to add items to their cart with their remote control after they see the commercial.

“Transactions will happen over the big screen in the living room,” Blanksteen said. For more considered purchases, items such as cars, people could “learn more” and have an email delivered to their inbox with follow-up information.

Basics like measurement and frequency capping are also a focus for Vudu, in part because its partners want parity with more mature platforms. P&G, for example, started advertising for a couple dozen of its brands more than a year ago.

“P&G has robust requirements around data, analytics and targeting,” Blanksteen said. “They’re not only a great customer, they help us get better, and we want to make sure our platform meets their standards.”

But will consumers find it creepy that Vudu knows so much about their purchase decisions and targets them based on what they buy?

“We did a lot of research, and people don’t mind ads that are appropriate to them,” Blanksteen said.

Vudu is stepping up that value proposition by committing to showing fewer, more relevant ads. Like most streaming platforms, its ad load – approximately 8 minutes per hour – is far less than networks. Without targeting, networks “have to sell more ads to deliver the same value,” Blanksteen said.

Vudu’s math removes waste – and nets the same result, Blanksteen said. “With better, more relevant ads, you can deliver fewer ads, because they are more effective.”