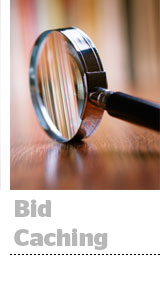 The practice accounted for half of all impressions filled by Index Exchange, according to research conducted by Jounce Media and published Monday evening.

The fallout from the buy side has been ferocious since the practice was revealed last week.

Varick Media CEO Paul Dolan stated on Twitter that his company had paused buying with Index Exchange “until we get more clarity on bid caching.”

Neal Richter, co-chair of the IAB Tech Lab’s openRTB working group and on its board of directors, as well as CTO of Rakuten Marketing, wavered less in his condemnation.

“The protocol is clear,” he told AdExchanger. “It’s a request and response for a particular auction ID. Bids for one auction ID should not be used on other auction IDs until a clear protocol has been worked out.”

Even marketers chimed in. “Definition of sketchy,” said a marketing manager at health care company McKesson, reacting to the news on Twitter.

And the fallout continues, with some sources speculating that Index will have to refund disgruntled buyers.

The programmatic consultancy began looking into the practice in Q1 after inquiries from a marketer. In early August, it independently funded and conducted a test where it purchased 1.7 million impressions across comScore 1,000 websites and nine exchanges.

Between 44% and 50% of all impressions filled by Index Exchange showed signs of bid caching.

But if bid caching happens on Index’s servers, and not out in the open, how could Jounce Media find out it had happened? The researchers looked for impressions that both violated a once-in-a-lifetime frequency cap it put in place and raised two of three red flags.

The first red flag looked for time lags of more than 10 seconds after an impression was served.

The second two red flags looked for URL mismatches that indicated an ad was served on a different piece of content than appeared in the bid request.

If the bid request contained just the homepage URL of a publisher, or if the previous ad served was on a different article page than the one where Jounce Media bought its second impression, those discrepancies indicated a bid was being held from earlier in the user’s session.

Jounce saw all of Index’s bid caching cease between Aug. 14 and Aug. 16, when DSPs and media buyers were made aware of the practice and Index Exchange paused bid caching.

The use of bid caching is limited to Index Exchange, according to Jounce Media’s research.

Inventory purchased on AppNexus, BidSwitch, Google Ad Manager, Oath, OpenX, PubMatic, Rubicon Project and Sovrn did not raise red flags on more than 5% of their inventory, which Jounce Media considered a false positive.

“Index was alone in engaging in a bad practice, and they responded to pushback to become a cleaner marketplace,” Kane said. “Our industry is healthier today than it was a week ago, and it gets healthier when you shine a light.”

If 50% of all impressions Index Exchange served used bid caching, it casts further doubt on its argument that the practice improved user experience. And it raises further concerns about the harm this practice caused to buyers.

The Jounce Media study included no video or mobile app impressions, where the exchange argued that its practice had justifiable uses.

When Index Exchange first admitted to using bid caching in a Wednesday blog post, it claimed it did so “dynamically” and did not articulate the rules around what types of content justified the practice.

In an interview last week, Index Exchange product SVP Drew Bradstock told AdExchanger he couldn’t offer an example of a scenario where the exchange did not use bid caching. It’s not clear why Index Exchange ran bid caching on the percentage of inventory that it did.

Casale said in his letter to partners that he regretted the company’s lack of transparency – but maintained that buyers would opt into the practice once they understood it better.

Index Exchange did not respond to requests for comment about its letter to partners or the Jounce Media research.