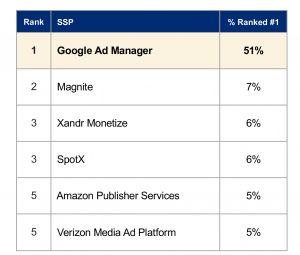 The recent Advertiser Perceptions survey of the SSP market shows that (drumroll ….) Google is still the dominant gateway for online advertising, though publishers are testing and adding other SSPs more than ever.

The survey was fielded in February and March of this year, and encompasses 151 publishing execs, each of whom represents a site with at least three million unique monthly visitors and sells inventory using an SSP.

One important trend is the steady growth in the average number of SSPs per publisher.

A year ago, programmatic publishers used an average of five SSPs. Now, that number is at six, and rising. And in another year, the average should tick up again to seven, said Lauren Fisher, Advertiser Perceptions VP of business intelligence.

The SSP trend is the mirror opposite of what happened with DSPs. The average number of buying platforms used by advertisers dropped from six to three over the course of three years.

“Publishers are open to putting as many pipes as possible into their inventory as possible, if that SSP can make the case that it has unique supply or data that will make the publisher more money,” Fisher said.

In other words, advertisers want as few pipes as possible, to keep a watchful eye over digital media spend; Publishers are incentivized to keep adding bidders for their inventory. 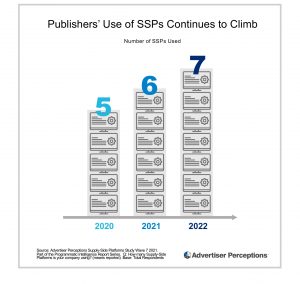 That’s helped bolster usage rates across the SSP market.  Last year, only Google Ad Manager and Amazon Publisher Services exceeded a 40% usage rate, with 74% and 49%, respectively. But since then, Verizon Media, PubMatic, Xandr Monetize, OpenX, SpotX and Index Exchange have all crept above two-fifths adoption.

However, usage rates are not the best metric – they measure only that publishers integrate with certain SSPs, with no guarantee of meaningful spend actually passing between the platforms.

When Advertiser Perceptions asks publishers which SSP is their single most preferred, Google is sitting pretty at 51%, while Magnite, Xandr, SpotX, Amazon and Verizon pull between 5% and 7%.

“Google is in a much more commanding position on the SSP side,” said Advertiser Perceptions strategy chief Kevin Mannion. “As a DSP, there’s more of a pitched battle between Google, Amazon and The Trade Desk.”

Verizon Media, for instance, has gained ten or more points in terms of SSP adoption in the past year, Mannion said. That’s partly because the company finished a messy integration of as many as six different SSPs that were part of AOL and Yahoo. The company has also put its weight behind a proprietary post-cookie ID, the ConnectID, which leverages first-party data from Verizon sites like Yahoo Sports and HuffPost. Twenty-eight percent of publishers either use or are exploring how to integrate with the ConnectID, according to the report. The Unified ID2.0, an industry identifier backed by The Trade Desk and many independent ad tech platforms, is still the most-common programmatic identifier (aside from third-party cookies) with 56%.

The non-Google SSPs have open space to grow, beyond pushing adoption for programmatic IDs. For one thing, header bidding is now practically default tech for site monetization, but is gaining ground in video and CTV. Fifty-five percent of publishers now use header bidding for video ads, up from 37% last year. And 22% use header bidding for CTV ads, in the first Advertiser Perceptions report to measure that stat.

Private marketplaces (PMPs) are also a boon for SSPs. Nine out of 10 publishers now use PMPs, and rely on SSPs to operate those products.

There is an advantage for SSPs that are part of full-stack ad offerings, from first-party media through to the DSP, Fisher said. She said platforms like Google, Amazon and Verizon have effectively sold advertisers and agencies on first-party identity alternatives to third-party cookies.

“The publishers we’re speaking with say they’re going to ‘see it through’ with Google, and with Google’s the Privacy Sandbox, cohorts and FLoC,” Fisher said of how publishers are looking at identity solutions. “But they’re also looking to see what else is out there.”