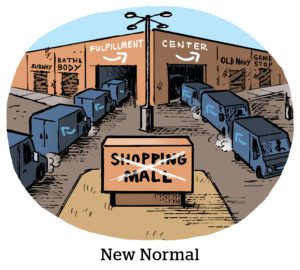 The ecommerce marketplace management startup Whitebox launched an analytics product on Thursday that spans the world of ad tech and that of warehouse and delivery services.

A differentiator for Whitebox is that it owns both a fulfillment network and delivery warehouses in Baltimore, Memphis and Las Vegas.

The new analytics product, called Omnifi, unites Whitebox’s ecommerce ad agency on one side and the warehouse data on the other, said CEO Marcus Startzel.

Whitebox’s roots are in warehousing and delivery. Startzel joined two years ago after a four-year stint as CRO of AppNexus. And it’s not a coincidence that Whitebox brought in an old ad tech-hand to steer the company.

“What we think of as the modern commerce platform needs to have that agency side and experience in the ad tech space, as well as the capabilities to do direct-to-consumer fulfillment,” Startzel said.

With one foot in online advertising and the other in the real-world of shipping and delivery, the Omnifi data can sharpen its ad tech in ways other ecommerce ad tech cannot, he said.

For example, a brand might target someone with products that can be packaged more efficiently at the warehouse. Or, since Whitebox knows the specifics of delivery costs by ZIP code, brands can dynamically change price points or offer personalized discounts to people who will be cheaper to ship to.

Connecting the warehouse operation to advertising and ecommerce management is a priority for ecommerce brands, said Jeremy Sherman, director of marketing and growth for the vegan snack brand Snacklins. The company’s online sales are split about evenly between Amazon and its own site, he said.

But Amazon halts sponsored product and search placements if a product is out of stock, so at times the company needs to understand when to shift its warehouse stock to Amazon, he said. Or if Snacklins’ DTC channel with Shopify is having a big promotion, it may need to hold more inventory there.

Ecommerce products also need to be able to shift their warehouse and advertising strategies on a dime. A recurrent horror story shared among Amazon sellers is the day they woke up to find their account shut down, said Ben Knox, SVP of digital for Super Coffee. If that happens – it could be for customer complaints, contested reviews or some unknown policy violation – the brand might be stuck in retail limbo with their inventory warehoused in Amazon’s supply chain.

That scenario hasn’t happened to Super Coffee, Knox said. And if it did happen, with Whitebox Super Coffee would be able to shift that inventory to its Shopify channel.

The past year has been especially busy for Whitebox because brands have seen how Amazon might flip a policy switch and abruptly change their ecommerce advertising and fulfilment strategies, Startzel said.

Last year, Amazon created rules about how much and what kinds of inventory brands are allowed to send to Amazon warehouses due to the pandemic (i.e. Amazon will make its own decision to ramp up toilet paper and cleaning supplies, while setting limits on other products), which mean sellers have less flexibility to decide for themselves how to stock products.

“Sellers want the control over their inventory and fulfillment options, yes,” Startzel said. “But it’s also clear now how the back end of the business, the warehousing and delivery, does directly impact what they can do with their agency and ad tech.”