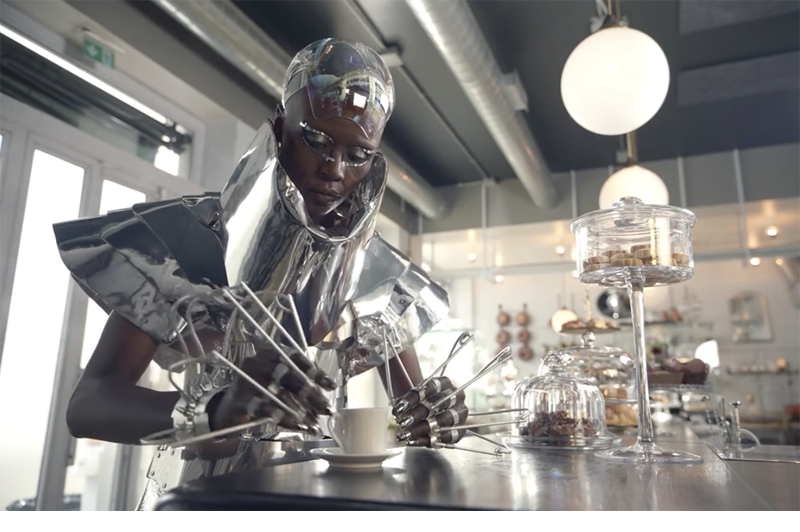 Lots of first-time advertisers are heading to the Super Bowl this year: electric vehicle makers, crypto brands … and Criteo?

It’s hard to imagine a bigger stage for a company that usually operates behind the scenes.

Criteo’s ad, which is set to air during NBC’s broadcast of the Super Bowl in three markets (NYC, Chicago and San Francisco) features a woman in a coffee shop accosted by increasingly insistent future versions of herself all claiming they know what’s best for her.

The tagline: “Everyone will try to tell you what the future holds. Criteo is creating an open internet where you can choose what’s best for you … and future you.”

Anyone in ad tech knows that Criteo is referring to keeping the open web, well, open, despite platform changes like Google’s decision to (eventually) remove third-party cookies from Chrome. Consumers want choice, etcetera.

Difficult to say what an average consumer will make of the ad or its underlying message, but Criteo is hoping viewers are curious enough to visit an accompanying microsite with more information about commerce media and the future of the open internet.

Criteo isn’t the only B2B company shelling out for airtime during the big game this weekend. Workforce app development platform Monday.com and online retailer Rakuten are also making their Super Bowl debuts this year.

AdExchanger caught up with Criteo’s CMO Brendan McCarthy to talk about the company’s motivation and what it’s looking to achieve during Super Bowl LVI.

Why would a B2B company buy a Super Bowl ad?

Criteo wants to build an open internet where you can go where you want, shop where you want and connect with who you want. We purposefully selected the biggest day in advertising to engage with both industry players (marketers, businesses) and consumers about the future of the internet – where data is king, but not at the expense of consumer choice, privacy or diversity of innovation due to the size of companies and creators.

Educating people about what that future looks like, or could look like, is more critical now than ever before. That’s why we needed a big stage and opportunity to talk to consumers for the first time.

We want consumers to imagine a future where data creates better experiences and where we can connect on our own terms. After all, we are all consumers and we should all have choices that lead to richer experiences on the open internet.

Isn’t a Super Bowl buy the exact opposite of hypertargeting?

We deliberately chose to execute the TV portion of our buy in three major US markets: New York, Chicago and San Francisco. This is the ideal moment to engage with a broader consumer audience for the first time, because people care more than ever about the choices they are making on the internet.

The spot is just the start – we have a buy that continues through the Olympics, and across the UK, across the digital ecosystem.

What exactly is Criteo looking to achieve by advertising during the Super Bowl?

Our goal is to reach as many people as possible and start a conversation about the future of the open internet. Ideally, we want people to see this ad and then be prompted to explore more across the digital ecosystem, check out Criteo along the way and be able to understand what the future looks like – or could look like – and the choices that they have.