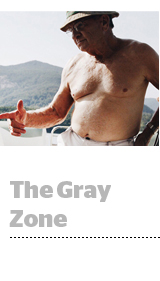 Do ads for STD self-testing kits count as sexual content? If medical and recreational marijuana use is legal in California, why can’t a cannabis advertiser geotarget Californians over the age of 21 on the large social platforms?

These are the gray areas that certain categories of advertisers have to navigate on a daily basis, and smaller advertisers often face frustrations working through the opaque rules set out by the platforms.

“It’s a challenge when you’re dealing with automated systems that review your ads or even human reviewers using some internal checklist and making judgment calls,” said Ursula Hessenflow, CEO and co-founder of myLAB Box, a provider of at-home screening kits for sexually transmitted diseases.

The company has repeatedly run into problems in paid social, where seemingly tame ad creative promoting its product has been flagged and rejected by Facebook, Twitter, Instagram, Google and several dating apps. One rejected ad features a close-up of a young woman’s face as she looks meaningfully into the camera next to the words, “Worried about cervical cancer? Test for HPV.”

As recently as early October, seven myLAB Box ads that had been initially approved and were running for months on Facebook were suddenly rejected.

Mike Weiss, president and founder of Cannacopia, a cannabis discovery and review app, has also run into roadblocks when trying to get ads approved for Facebook, Instagram and Twitter.

The lack of paid social is a major gap in Cannacopia’s advertising mix, said Weiss, who recently joined the National Cannabis Industry Association’s marketing and advertising committee to try and start a dialogue with the platforms and figure out how they can better work together.

More traditional publishers also have their work cut out for them.

The New York Times is keen to work with pharma advertisers, for example, but the rules and regulations surrounding the sale and promotion of pharmaceuticals, both regulatory and by platform, mean buying and selling must happen directly through private marketplace deals.

“We 100% want to work with thought-provoking pharma brands, but we need to be highly sensitive at the same time to make sure we’re adhering to standards,” said Sara Badler, director of programmatic advertising at The New York Times.

And the Times isn’t the only party in the transaction with standards to adhere to.

“We do PMP deals because we want to make sure these advertisers can access the correct inventory and that it’s a brand-safe environment for them as well,” Badler said. “They don’t want to run on specific content the same as we don’t want them to run on certain pieces.”

Advertisers that operate in the gray zone have to get creative with their media plans.

Take ads for class-action lawsuits, like mislabled food or a faulty airbag. The lawyers bringing the case are often court-mandated to ensure everyone potentially affected is aware that there’s a lawsuit going on. It’s legitimate demand, but many publishers shy away, and that makes the ads difficult to transact programmatically.

“The product mentioned in the ad may not be the most legit thing, like a furniture brand, for example, that used lead paint that could be harmful to children, but that’s exactly why there’s a class-action lawsuit against it,” said Brianna Rozzi, director of automated trading at Xaxis, which runs quite a few class-action lawsuit campaigns.

For advertisers, the best tactic is usually reaching out directly to the publisher to make their case.

“Just because it’s programmatic doesn’t mean that you can’t pick up the phone and talk to the end publisher to try and figure out how you can work together,” Rozzi said. “Even so, we sometimes don’t have success. We have a relationship with different SSPs and we can try to push on behalf of our advertisers and that’s really all we can do.”

Still, some advertisers purposely obfuscate who they are and what they’re selling to squeak through an automated pre-screening process. They might submit kosher creative to the demand-side platform and later swap it out for something else after the ad was approved.

Intentional transgressions don’t happen a lot, but when they do, the advertiser gets banned, said Ari Levenfeld, chief privacy officer of Sizmek, which bought DSP Rocket Fuel in July.

Although The New York Times “leans heavily” on its exchange partners to guard the gates against unwanted demand, it doesn’t outsource safety and quality – and the punishment for an infraction is no joke.

“I’ve heard about publishers doing things like three strikes and you’re out, but editorial is too important to us, and if something happens even once, it has to be fixed immediately and there would be consequences on all sides,” Badler said. “We rely on our partners and that’s why we have so few.”