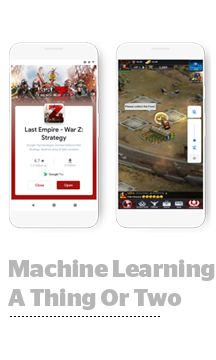 Machine learning is becoming central to user acquisition and app advertising at Google.

On Wednesday, Google introduced five game developer-focused ads products, four of which are powered by some form of machine learning.

The first new release, called pre-registration ads, for example, allows developers to reach Android users across the Play store, YouTube, search and display network with ads that encourage sign-ups for games before they’re released. The Play store will send push notifications to pre-registered users when the game comes out.

There’s no audience targeting available for pre-registration ads, which are currently in beta. Rather, an algorithm will be used to determine who’s most likely to pre-register for a game.

“Many of our offerings work best when the machine learning has full exploration capabilities instead of being more constrained,” said Sissie Hsiao, VP of product for mobile app advertising at Google.

And then there’s App Campaigns for engagement, which is now generally available and uses machine learning to find and re-engage lapsed users who might be valuable but, for whatever reason, stopped using an app.

Yet another tool, dubbed smart segmentation and part of AdMob, enables developers to generate money from non-paying users by only presenting ads to people who show no signs of making in-app purchases (IAPs). Smart segmentation uses a machine learning algorithm to predict on an ad slot basis whether a user is likely to make a purchase in the game, Hsiao said.

If someone is unlikely to ever shell out on an in-app purchase, the developer can monetize that person with an ad without fear of hurting or cannibalizing the experience of paying users, Hsiao said, noting that developers are increasingly using a hybrid IAP-advertising model to monetize, whereas in the past it was usually just one or the other.

“This is just one more step in us moving toward thinking about publisher solutions with more automation and using machine learning to be smarter about when and how to show ads to users,” Hsiao said.

Even so, some developers might feel nervous about giving up all the levers they’re used to pulling to control how they optimize, bid and target.

Hsiao acknowledged the “tension between control and AI,” a topic with implications far beyond the app monetization space. But machine learning functions best when it’s left to do its thing without constraints, she said.

“You can’t just take two-thirds of the engine out – machine learning doesn’t work piecemeal,” Hsiao said. “I firmly believe that manually is no longer the most efficient way to do things.”

But the robots aren’t taking over everything. Google also released one other ad solution that doesn’t have a machine learning component: rewarded ads in Play, now in open beta. It allows developers to easily test rewarded ads within the Google Play Console – basically, ads manager for developers – without adding additional SDKs to their app.