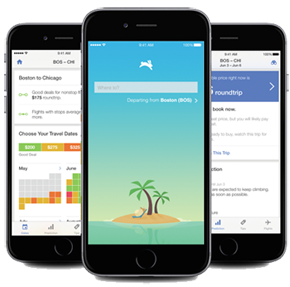 Airfare and hotel prediction app Hopper is different from other travel booking services. When you download Hopper, the app tells you not to buy anything.

And that’s because Hopper acquires users at the top of the funnel.

The app lets users track flight prices over time. When the price dips as low as it’s likely to go, Hopper sends a notification that it’s time to buy.

Hopper’s data science team uses a homegrown algorithm to crunch billions of flight and hotel room prices per day. The algorithm can predict with 95% accuracy whether a price will go up or down, Lejeune said. It’s Hopper’s job to keep its users interested and retained, often over the course of several months, until it’s actually time to book.

“We send an average of 42 push notifications to a user to keep them in the loop until the final price drop happens,” Lejeune said.

The strategy appears to be working. The app is getting around 1 million installs per months, roughly half of which come through organic traffic and the rest through paid social acquisition.

“The big online travel agencies mastered search, so if you want to enter that space today, you can’t – they’ll outbid you,” Lejeune said. “So, our goal is to be at the forefront of mobile user acquisition in travel.”

AdExchanger caught up with Lejeune to get a peek under Hopper’s hood.

How do you compete with the travel booking juggernauts?

Booking.com, Priceline and Expedia spend billions of dollars on Google every year – they spend our annual marketing budget roughly every two hours.

But these companies are extremely focused on the lower funnel. They’ve forgotten you can talk to users on Facebook before they’re even searching for a flight. If we provide value beyond the moment of search, users will retain.

A conversion machine like Booking.com creates anxiety – we call it “hate selling” – because they tell you, “Two people are watching this hotel, three people just booked a room and there’s only one room left!” Everything is flashing red and green and orange and it stresses people out.

But our product informs the way we acquire users and dictates our user experience strategy. That strategy allows us to get installs three to four months before someone takes a trip, because we have a value prop on pricing and notifications. And when they are ready to buy, we’re not out there trying to capture them again through Google AdWords.

We work with AppsFlyer and we’ve worked with Smartly.io to build our own automated creative templates. But we decided to build our own software. The more we grow as a company, the more in-house stuff we want to build.

We advertise between 500 and 1,000 flight deals every day and the prices constantly change. That’s why we had to build a Hopper ad engine to plug into the platform APIs.

How does the Hopper ad engine work?

Last year, Hopper probably spent 95% of its money on Facebook – north of $1 million a month. That’s not something you can do manually.

But rather than hiring another person whose whole job is just to optimize our Facebook campaigns, which might give us a short-term 5% or 10% improvement on performance, our eye is fixed on mid- and long-term goals. We brought on two people to automate and diversify our mix. We don’t want to rely on Facebook in the way that Expedia and Booking.com rely on Google.

Our aim is to scale campaigns on Snap, Pinterest, Twitter, Instagram and Facebook. The Hopper ads engine speaks to the Hopper deals API for flights. Our data scientists score the deals, which we use to acquire new users. Our engines ingests those deals and auto-creates ads on platforms.

We have illustrations for every destination and a script that puts images together with text. All of the creative is made based on the specs for each platform. But the optimization is the most important part of this.

After a few hundred impressions on each deal, we should be able to predict what’s going to interest a user. We act on those signals early and shift budget to the best-performing deals.

This is not something we can work on with an agency or an ad network. They don’t have a sophisticated enough way to target or create ads. But we’ve had amazing success, for example, with Snap directly by targeting users based on their closest airport. That’s only possible, though, because we were included in Snap’s radius targeting alpha.

Have you experimented with OOH and TV yet?

We’re interested in out-of-home and we did do a TV experiment. We ran the cheapest spots we could at night with a minimum cost so we could test it. [TV measurement company] wywy’s API tracked our clips and informed AppsFlyer when they the ads were running so AppsFlyer could attribute the installs that came during the TV campaign.

In the end, the CPI wasn’t competitive, so we need a new approach. Maybe that means more repetition on TV or maybe that means looking at the lift TV brings to digital channels, like what “Game of War” is trying to do with television ads.

Like with anything we do, it’s about finding the right recipe for us.