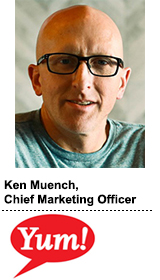 In 2011, Yum! Brands was struggling to boost slumping sales at Taco Bell.

“They had been trying to jolt sales with lowering prices and stuff like that and it really wasn't working,” said Yum! Brands CMO Ken Muench.

Former Yum! Brands CEO Greg Creed, the head of Taco Bell at the time, brought in Collider Labs – a consumer insights and marketing strategy consultancy founded by Muench and acquired by Yum! Brands in 2015 – to figure out what was wrong and turn things around.

The problem: Taco Bell was “out of touch” and no longer “culturally relevant.”

“It was out of sync with the culture,” said Muench. “It was selling affordable, fill-up food at a time when people were starting to Instagram for food. With the coming of age of millennials back then and Instagram, food became … an identity choice.”

Processing those insights, Creed re-energized the Taco Bell brand by launching the “Live Más” marketing campaign in 2012 as well as the introduction of the Doritos Locos Taco and Cantina Bell Menu.

That turnaround led to the development of a strategy called R.E.D. – relevance, ease and distinctiveness – which looked not only at Taco Bell’s relevance in the marketplace, but also how easily accessible the brand was to consumers and how it set itself apart from competitors.

“We adjusted the brand, sales picked back up, and then we needed to keep sales going,” Muench said. “We've had eight or nine years of consistent sales growth across Taco Bell.”

The strategy worked so well, Muench added, that Creed deployed it globally and it has since been used to drive other Yum! Brands campaigns for KFC, Pizza Hut and Habit Burger Grill.

The initiative is now the subject of a new book authored by Creed and Muench, “R.E.D. Marketing: The Three Ingredients of Leading Brands,” out this week.

AdExchanger: How did the R.E.D. strategy evolve?

KEN MUENCH: R.E.D. was created during the Taco Bell turnaround between 2011 and 2015. After figuring out how to make the brand more relevant, ease and distinctiveness started playing a bigger role. In pursuit of ease, for instance, we launched and refined a variety of apps and more frictionless consumer decision journeys.

After that it was all about refinement, testing it on the other brands and in other countries, until we worked out all the kinks.

Why is it important for marketers to do all three?

Relevance, ease and distinctiveness are really the core elements of marketing.

Every marketer seems to have their own forte  and our realization was, that's not going to work. You cannot have a marketer with a forte and a weakness because it's so competitive.

We needed every marketer to have every strength and that's why we developed R.E.D.

We realized that everybody's got to do all three – you need a holistic marketer, not a niche, narrow marketer, which is a major problem. That’s what we trained all 2,000 marketers to do around the world and it’s the foundation of what we do.

Can you share some examples of how the R.E.D. strategy has worked?

KFC in South Africa is a powerhouse brand. But they were going negative on sales for quite some time.

The brand stood for togetherness and warmth and a period in time in South Africa after apartheid called the Rainbow Nation. People loved the brand during that period.

But then a new generation grew up and they were about individual success or about coolness and me as a person, which is very different. And suddenly the brand is not so relevant. We fixed that and within a year, sales picked right back up, and they've been on a tear since. Basically, cracking the problem in South Africa was about cultural relevance.

At the same time, we went into Pizza Hut in the UK, and we did the exact same study. And there was no cultural relevance problem. The problem was that the brand was not distinctive.

They created a campaign called “Now That's Delivering” with a character that was super consistent and they stuck with it. Their sales went up significantly and they have continued to grow ever since.

Three years later, they're still on the exact same campaign because their issue was distinctive.

Is there a greater sense of urgency because of all the changes marketers experienced in the past year due to COVID-19?

We were already positioned very well going into the pandemic because we were so heavy on drive-through around the world and we were already driven on ease. It was just about pivoting not only drive-through but also apps and digital delivery. All that stuff we've accelerated globally.

There are two massive changes that happened because of COVID.

There's a massive shift globally of people focusing on people, caring about people, and helping people. And the idea that companies have a role to play in helping society. Because of R.E.D., our antennae were up and we detected that change, and we've reacted around the world pretty aggressively leaning into society helping society.

You need to make things easier than they ever have been in the history of QSR. How smooth is that app? How seamlessly did you deliver the right message to the right person? Anything that you can do to make that process of what we call a consumer decision easier is going to pay dividends right now.

What are some of the biggest challenges that marketers are facing today?

The biggest challenge facing marketers today is how to balance it all. Right now, marketers are focused on overnight sales and ecommerce and dumping all their money into that. They've forgotten about building their brand over time. In the end what builds a brand and sales is having a big, powerful brand that's top of mind.