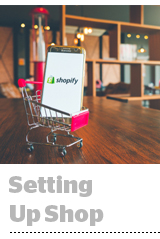 A wave of new brands and merchants are adopting Shopify’s retail technology, as consumer behavior swings during the coronavirus pandemic.

Shopify said during its Q1 earnings Wednesday that the number of new stores selling on its platform grew by 62% in the second half of Q1 compared to the first half, and the number of stores created in less than three days jumped 85%, underscoring brick-and-mortar retailers’ urgency to replace lost revenue.

Shopify’s earnings grew 47% in Q1 to $470 million, and the company is making bets now that could lead to a major Q3 boost, said CFO Amy Shapero.

The new stores, for instance, aren’t immediately contributing to Shopify’s subscription revenue, since it extended its free trial period from 14 days to 90 days. And there’s no guarantee that that business will outlast crisis conditions.

And while the company is adding thousands of new sellers via the free trial, Shopify Plus, its premium plan, actually lost subscribers as merchants cut back on costs. So there are real risks in juggling new merchants and steering customers to Shopify’s lucrative products.

“It is still too early and the macro environment is too uncertain to make predictions about how successful these new stores will be,” said COO Harley Finkelstein.

Some new Shopify merchants are traditional retailers setting up Shopify accounts because people aren’t coming to stores. Some large CPG brands, including Heinz ketchup and baked beans, are using Shopify to stand up direct-to-consumer business lines in response to the pandemic, since retail distribution is such a mess.

Shopify added new features last quarter like gift cards for all merchants and in-store or curbside pickup. But it’s unclear if this surge will last, and whether shopping, including groceries, will revert to the old normal or settle into a new, more omnichannel approach.

The kind of shopping that has “gone up more than anything else” is customers within 25 kilometers of a store placing online orders for pickup, said CEO Tobias Lutke. Categories like food and beverage are spiking, but those aren’t Shopify’s breadbasket, so to speak.

Will those consumer patterns hold?

“While year-over-year gross merchandise volume growth accelerated in April compared with the first quarter of 2020, this growth was distributed over a broader base of merchants, and it is unclear how sustainable consumer spending levels will be in this uncertain economic environment,” according to Shopify’s earnings release.

Shopify execs are hesitant to quantify the potential returns, because the consumer landscape right now is so uncertain – the company didn’t release updated financial guidance for the rest of the year.

But it’s clear where the company is placing its bets. The extension of the free trial period sacrifices short-term revenue with the potential to add a major a wave of customers if they remain on the platform three months from now.

After an “extensive analysis” of the company’s overall expenditures, Shapero said that Shopify is investing more in promoting and adding features to the 90-day free trial offer, and redeploying a large marketing budget it had set for a brand-building campaign.

“There is a set of tailwinds and headwinds and right now,” she said. “Those tailwinds are far outweighing the headwinds for Shopify.”