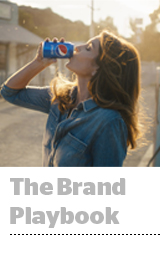 A 30-second Super Bowl spot costs $5 million, and could be seen by 100 million live viewers. Depending on your perspective, it could be either the greatest opportunity or the biggest waste of the year.

We know one brand’s perspective, at least.

PepsiCo, a long-time Super Bowl partner, is back in force this year with six different brands running commercials, plus the Pepsi halftime show, in-stadium food and drinks and Gatorade on the sidelines.

So what makes Pepsi so confident in the ROI of its Super Bowl partnership?

Most new products have to earn their way onto shelves through successful tests, especially for snacks and beverages because stores expect high turnover.

But when Doritos (a Frito-Lay brand) launched its new line of chips during last year’s Super Bowl, it helped put the product in stores across the country. And it had NFL-licensed displays to spur impulse purchases and attract people shopping for watch parties.

“I see a strong correlation between our announcing the product on the Super Bowl stage and the traction we saw with retail partners in the first year,” Ferdinando said.

There’s a “multiplier effect” on Pepsi’s beverage and snack brands from Super Bowl ads, Lyons said. More Pepsi products are sold in stores on Super Bowl than any other day of the year, he said, partly because of in-store marketing deals with retailers that want to piggyback on Pepsi’s advertising and NFL partnership.

Pepsi manufactures 20% of its yearly snack products in the six weeks prior to the Super Bowl, Ferdinando said.

Pepsi also makes the ROI work because it focuses on specific objectives for each brand in the Super Bowl.

Mountain Dew Zero, for instance, is a new product line, so the goal is awareness, Lyons said. Pepsi will track brand recognition in the weeks leading up to and following the Super Bowl.

While the Pepsi brand doesn’t need awareness, it prizes engagement and association with the game.

“Pepsi has been the most talked about brand during the Super Bowl the past four years,” he said. And the brand marketing team doesn’t expect that streak to stop now.

SodaStream, which Pepsi acquired at the end of 2018, is airing its first Super Bowl commercial in six years. But unlike Pepsi’s other brands, which are active in the run-up to game day, SodaStream’s priorities kick into gear after the Super Bowl, said Bryan Welsh, GM of the North America business.

SodaStream does share some of the same Super Bowl benefits as snacks and beverages, even though it’s a flavored water carbonation machine people use at home.

Welsh said the brand’s objective is consumer education, so after the Super Bowl SodaStream will be leaning into retail marketing partnerships with in-store demos and displays, to help people see how easy it is to fizz up their water. Bill Nye, SodaStream’s celebrity endorser and star of its commercial, is an apt partner for branding those in-store displays as educational demos, he said.

“It’s possible to be romanced into glitzy things that could be attached to a campaign like this,” Welsh said. “But the team has been very focused on our brief.”