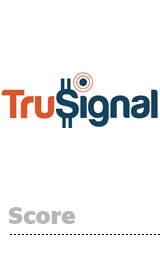 TruSignal is striking out on its own with $5 million in Series A funding and a plan: to help demand-side platforms and data providers use offline data to build people-based lookalike audiences for online targeting.

On Thursday, TruSignal completed its spin-off from sister company eBureau, an offline data and predictive analytics platform which itself was acquired Tuesday by credit scoring company TransUnion.

Founded in 2012, TruSignal was incubated within eBureau as a digital advertising and data unit. But the plan all along was to peel TruSignal away as an independent entity after proving the business model, said TruSignal’s president, David Dowhan.

“Over the last couple of years, there’s been a growing emphasis on people-based marketing and a much greater acceptance of lookalike modeling, with Facebook blazing the trail,” Dowhan said. “We now have a critical mass of customers, and the timing was just right for us to do this.”

The bulk of TruSignal’s funding round, which was led by Redpoint Ventures, Split Rock Partners and Tenaya Capital, will go toward building out its machine learning-focused product road map and hiring engineers and customer service staff. The goal is to push the company’s headcount past 30 by Q1, compared to 24 today.

When TruSignal first launched, it worked directly with brands looking to create people-based lookalike audiences. But over the past year, the company has transitioned to a more behind-the-scenes role selling its predictive modeling tech as a white-label solution to media companies, data providers and buying platforms.

The decision was strategic, Dowhan said. For one, pitching brands directly put TruSignal in competition with potential clients, including agencies. But it also wasn’t scalable, which is why the company started focusing on the vendor ecosystem with clients like 4C, NinthDecimal and Amobee.

TruSignal then went a step further and released its modeling capability as an API so that its technology could be plugged directly into third-party platforms. When advertisers do audience extension against mobile location data through NinthDecimal, for example, the interface is NinthDecimal’s, but the underlying tech is powered by TruSignal.

“The last thing the world needs is another platform for people to log in to,” Dowhan said. “An API makes our data and insights more easily accessible to our partners.”

TruSignal’s technology works by ingesting a seed file – typically a list of hashed email addresses, anonymized ad IDs or some other form of CRM data – and appending its own offline data, including demographics, past purchase history, hobbies and financial info, to build a predictive model that calculates a score from zero to 99 for each of the 220 million adults in the US.

People with higher scores are more likely to look like the advertiser’s desired target and get onboarded into a lookalike audience segment for cross-platform ad targeting.

It’s a lot like lookalike audience creation on Facebook. The difference is that the data – and the insights – are portable, Dowhan said.

“Facebook’s audiences are contained within the walls of Facebook, but what if you want to target the exact same people across addressable TV, Snapchat, display, video? There’s no easy way to do that,” he said.

For that reason, Dowhan sees TruSignal’s offering as complementary to Facebook.

“We have some clients that build Facebook lookalikes and use them side by side with TruSignal lookalikes,” he said. “Facebook finds people our algorithm misses and vice versa.”

TruSignal is also looking to differentiate with its focus on offline data. Online behavioral data is a valuable signal, but the industry “has relied on the data exhaust from campaigns far too much,” Dowhan said, “and more sophisticated data techniques need to be brought to bear.”

“Online data may tell you when someone is in-market,” Dowhan said. “But offline data helps you understand a customer’s lifetime value.”

“Offline data is becoming an important foundation for digital marketing,” he said. “We see what Facebook is doing as a validation of what we’re focused on.”