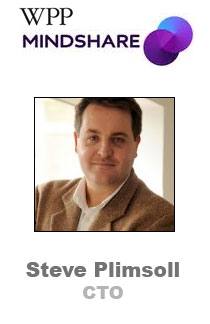 For agencies and marketers, there's a pervasive lack of synthesis among available consumer data. It would seem particularly frustrating for Steve Plimsoll, chief technology officer, Mindshare Worldwide, but he sounds much too excited about the next eight years, when he believes that problem will be solved.

Plimsoll is taking steps to position his media shop -- and WPP as a whole -- to be among the first to arrive at the solution. Last month, WPP launched CORE (see release), described as an open source, data-driven marketing intelligence platform that combines CRM, sales and supply chain data along with consumer information. To help manage that system, two weeks ago, Mindshare struck a partnership with data management marketing specialist Acxiom, which will plug in its collection of consumer insights to power Mindshare's targeting.

We spoke with Plimsoll, who was previously European VP of consulting and multi-channel marketing services for Acxiom before joining Mindshare last September, about his true frustration of the moment: namely that data management platforms (DMPs) do not fully live up to their title.

In the meantime, as agencies use data in a broader, more sophisticated level, beyond just looking at anonymous cookie data, Acxiom expects to be partnering much more closely with them than in the past, where its data services were primarily engaged by the agency trading desks, said Nada Stirratt, Acxiom's chief revenue officer, in a brief chat. "We see ourselves as an eDMP -- an enterprise DMP, and that's where we and Mindshare are aligned," she said. "Most DMPs are incomplete because they're based on anonymous cookie data for display advertising or content management. If you think about it, that's a tiny percent of data's potential. In order to have the deepest possible customer connection, you can't think of it as online or offline, media or channel. It's got to be more comprehensive in terms of who the customer really is. And that's what we provide."

AdExchanger: Tell us a bit about your responsibilities.

SP: I have three hats... developing and running the data AND technology strategy at Mindshare chiefly, as well as coordinating that with WPP.

As you put on those hats, what are your goals?

Everything with advertising and marketing is becoming more attributable. We're able to recognize consumers more and more in every different medium, whether that's cookie data or special recognition. We're moving from direct mail style "Dear Occupant" to a "Dear Viewer," where we know not only who the message is going to, but how best to match the offer it comes with in real time.

Media agencies have always been more ROI-focused than creative agencies. A creative agency can always be relatively secure in your director saying that everyone's going to enjoy the ad. In a media agency, you always have a number of specific benchmarks to hit, whether it be gross ratings points or some other metric. The intelligence that WPP has in terms of $60 billion of annual media spend is an incredible asset when it comes to performance. So we stand out for that reason, while most of the industry has not understood the importance of data and technology quite as well. And yet, for all our understanding, we've largely been enthusiastic amateurs. But that has changed over the past year.

What we've done with CORE is take the latest technologies, not from the marketing services industry, but from the financial industry and other leading edge environments. We're changing the type of people we have working on data and tech. My information architect was in charge of designing Citibank's architecture; my chief database architect was involved in building some of the most advanced gaming platforms in Europe. These are not people who would normally be hired by agencies or marketing services companies.

So with those people in place, what's the mission they're focused on?

CORE is about bringing all the agency data together. It's not that we're doing anything "new." It's that we're applying the old rules of direct marketing in a different way: we're appending data to owned media, earned media, cookies. If I can take the billions of dollars a year a company like Unilever or Nestlé or American Express spend on paid media and can start assigning individual household- and personal-level demographics along with some lifestyle data to every purchased impression, I can create an incredible data set. If I can track that at an individual creative level, so every spot on every publisher and every time of day, then link that to insights about these people – what's their household income, what are their demographic and lifestyle details? – you get to a comprehensive look at consumers that you could never get historically.

The result would ultimately redefine questions that marketers traditionally ask.

We've gotten to the point in marketing that we only ask the questions we know we can answer. To actually understand how much media we're spending, which creative performs best against a particular demographic, and how many GRPs we're getting at a certain period in time, is almost too painful to do. It takes up so much time and resources, marketers tended to avoid that. Now, we can answer those questions in minutes.

Haven't DMPs provided those kinds of answers for a while now?

I believe the industry that is currently calling itself "DMPs" are not data management platforms. If you want to call yourself a DMP in the world of marketing, you need all the data. A DMP is not a DSP or an ad network that all of a sudden adds third party data append. A DSP that adds data from Bluekai or Acxiom or others is just a slightly more intelligent DSP.

How does CORE differentiate itself from other DMPs?

We believe we've built a proper DMP. What that means is that we've brought in all the direct cookie data, all the digital data – what are we spending and where? We've mapped all those cookies against all the best in class providers, which I believe, from a lifestyle and demographic level is Acxiom, as well as behavioral data from Exponential, the market research data from WPP's Kantar. But on top of that, we've brought in the [financial] data at a personally identifiable information level and cookie data matched on that, along with campaign performance data.

To me, a proper DMP not only gives me the ability to do the audience buy, but it allows me to track the actual response and performance of that data.

By working with companies like MySupermarket, which WPP just invested in, and linking with some of the behavioral data across online and brick and mortar retailers, we're able to now show, this TV ad, at this point in time it was running up to 12 hours afterwards, we saw an "X percent" increase at the individual packaged goods level of basket placements in physical retail.

That's something people haven't been able to do. We are also linking in display data to show what is working best with specific audiences. After launching CORE at Cannes two weeks ago, we've had huge interest from Google, Facebook and comScore to give us direct access to all of their live data feeds because of the comprehensive way we're running our systems.

How do they propose to work with you on this?

Interestingly, they are proposing to work with the tool in an app format. We want to build [permanent virtual circuits] and launch them into Facebook and YouTube by linking at a cookie-sync level to know how those ads performed on a geo-targeted level through IP addresses – how did the ad do on the west coast versus the east coast? – and how it worked for married people with children and those without.

We can do multi-variant testing that will revolutionize the world of creative. It will allow them to create more content and see what works. I believe that creative teams, at some point in the near future, will employ analysts who can help answer the questions of art directors and copywriters. You will have the equivalent of the "Siri of data" sitting with the creative team. You'll be able to ask "Siri" who does this creative work better for?

When I think of the future of marketing and media, I see a world – and this is scary for a lot of people -- where we no longer buy spots for clients. The world of media allocation will be solely focused on where the audience will be present – which is what we're supposed to be doing right now. I want to look at a media plan and say, "What if I bought TV ads, digital ads, billboards, cinema, radio all generically and in real-time, based on the audience in front of them at a given moment in time?" That's where we're going. And companies that benefit from all the arbitrage involved in allocating media buys are fighting that. But it's a losing battle. By 2020, I believe that all media will be dynamically allocated, meaning that we will be buying and placing all ad buys in real-time based on the particular audience viewing a certain type of media.

The people who will win that race will be the ones who realize you don't need to join all data together directly. You need to aggregate the right data, so that when you do clearly recognize the individuals that comprise the audience, you'll be able to bring everything you know about that audience and make the best decision about what, where and when to advertise.

Most DMPs today are far too limited for that. The only performance they understand is their own performance. They have no integration with other channels, with retail channels, with supply chain movements and in-store stock. By bringing the full array of marketing data sets in, that will change. The systems where you only have data for display advertising, along with search and mobile, are going to compete against the direct marketing companies that rely on a complete customer view – the Unicas, the Neolanes. What DMPs do well is making very, very fast decisions on masses of interactions, but with less data. When I look at the leaders – WPP's Xaxis, Turn, Datalogix -- in the next two or three years, DMPs will begin to directly compete against the Unicas and Neolanes. A marketer doesn't want to use several different tools to understand their customer; they want a single view, they want one rules' engine, whether it's display advertising, direct mail or anything else.

So, over the next few years, we will either see the leading DMP players bought up by companies such as Unica, or we may very well see it the other way around. Where is the larger part of the marketer's budget? In advertising or customer relationship management? It's advertising. Direct marketing is maybe 10 percent of the budget. So that will allow media agencies to gain the upper hand, as they realize that DR is just another channel they need to closely include as part of their dynamically allocated ad buying. Because the trust and the dollars are already with the media agencies, it's a hell of a lot easier for a media agency to add the necessary DR capabilities than for DR providers to add the full range of creative, buying and planning responsibilities.