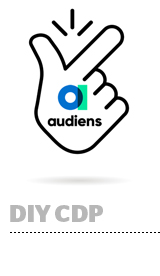 What was it like to complete the company’s first big funding round during a global pandemic?

“Nerve wracking,” joked Jonathan Brech, who was elevated from chief commercial officer to CEO of Audiens as part of the funding announcement.

But despite the ongoing crisis, “the fundamental drivers behind the deal didn’t change,” Brech said.

Marketers still need to be able to understand and segment their audiences.

Audiens, whose clients include ING, Three UK and Experian, aims to differentiate from the sea of CDPs by focusing specifically on audience management and making its technology easy for marketers to use without having to bother IT.

The platform uses machine learning to automate the process of collating data across sources, finding consumer behavior patterns and building audiences, which usually involves a lot of manual work, said Brech, who knows of what he speaks. He’s the former head of digital at KFC in the United Kingdom and Ireland.

“If you don’t have to chase the BI team just to get some insight on how your customers are behaving, you have more time to be creative and focus on strategy,” Brech said.

“Data that looks amazing on a Friday might not look so good on Monday,” Brech said.

NHN, which owns mobile gaming and entertainment properties in Korea, its own payment solution technology and a whole bunch of ad tech, including an ad network, SSP, DSP and DMP, first started showing interest in Audiens last year.

As part of its investment, NHN will provide Audiens with access to its own team of data scientists and engineers to help Audiens accelerate its road map.

Audiens plans to also use some of its funding to eventually expand its sales contacts internationally across Europe, particularly in Italy, where the company has its headquarters. France, Spain and Germany will follow, but Brech says he’ll probably hold off until at least months after the coronavirus crisis starts to calm down.

Brech says he made a point of calling all his 20 employees, most of whom are based in Milan, on a regular basis to check on them, especially during the prolonged lockdown.

He’s also regularly in touch with brand clients, who, at least as of now, seem keen not to cut the CDP out of their stack, despite growing budgetary constraints.

“Some mar tech partners are easy to switch off, and events like what we’re all experiencing now creates an opportunity for housekeeping, but we haven’t been cut by anyone,” Brech said. “We feel quite encouraged by that, because it means that our customers are genuinely interested in how their customers are behaving.”