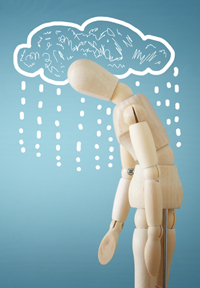 From March 3, before social distancing defined our lives, to April 1, the Ipsos Primary Consumer Sentiment Index clocked a precipitous dip in US consumer confidence, from 60.1 points to 45.5.

The downtrend appears to have leveled off as people become somewhat accustomed to coronavirus-induced restrictions.

But that doesn’t mean that consumer confidence about current or future economic conditions won’t plunge again as the economy gets worse, said Cliff Young, president of polling agency Ipsos Public Affairs, speaking Thursday during a virtual event hosted by the Advertising Research Foundation.

“It’s an existential shock to the system, whether that be in the US or globally,” Young said.

Although a decline in consumer confidence during a crisis is to be expected, this is stark – and has major implications for the overall state of the economy.

That’s because it’s indicative, Young said, of “a decrease in consumer expenditures and coping behaviors” as households cut out nonessential purchases and become less concerned about buying specific brands and more about “being able to make ends meet and put food on the table.”

Over the past month, roughly half of US adults have seen their household’s paychecks affected by COVID-19 in some form, according to a survey conducted by the National Opinion Research Center (NORC) at the University of Chicago.

At the same time, NORC found that 27% of Americans anticipate that they’ll go into debt to stockpile goods by getting a short-term loan or putting those expenses on a credit card they likely won’t pay off quickly, said Trevor Tompson, SVP of public affairs and media research at NORC.

Small businesses are struggling, and more than 17 million Americans applied for unemployment benefits over the past month.

All of which paints a very gloomy picture. But that doesn’t mean economic recovery isn’t possible in the relative near term once the outbreak is under control. Just don’t expect an immediate bounce back, Young said.

Recovery will be a gradual process as people move their way through the three main stages of any major health crisis, he said. Hunkering down will give way to a peek-your-head-out phase and an eventual return to normality.

Even when life is back to normal, though, certain behaviors will stick, a sort of hangover effect related to prolonged social distancing. People will likely continue to wear masks for a while, wash their hands more often and rely on food delivery rather than going out.

But there is one major caveat: Putting the public health benefits of social distancing aside, the longer we quarantine, the more difficult the economic rehab will be.