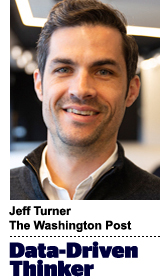 Today’s column is written by Jeff Turner, head of ad product for RED at The Washington Post.

For the digital advertising industry, 2019 was a year publishers, media buyers and ad tech vendors spent predicting how and when third-party cookies would die. We now have an answer: 2022.

Google’s plan to reduce support of third-party cookies in a new version of Chrome in two years will be their final nail in the coffin. While this is a huge win for privacy advocates, it’s also a major challenge for media buyers who have long relied on cookie data.

Media buyers must reevaluate their marketing strategy quickly. A post-cookie world will include less effective programmatic media and, even more daunting, a more fragmented media buying process. This disruption will cause those unprepared to sink and those prepared to succeed and steal market share. Here are three recommendations media buyers should enact now in order to be successful beyond 2022.

For the better part of a decade, media buying has consolidated among the top social platforms and programmatic exchanges, fueled by third-party cookies. While the shift allowed brands to reach online niche audiences at scale, it also resulted in fewer direct relationships with content creators and less insights about content consumption. With third-party cookie data loss, media buyers’ lack of content consumption insights will become a bigger problem.

The good news is that media buyers have weapons to solve this issue: They have large pools of cookied audiences, relationships with key publishers and 24 months to test and learn before those cookies depreciate. But media buyers need to act now. They need to partner with publishers to gather insights such as what content their audiences read, the topics that drive engagement and conversion with their brands and audiences’ preferred forms of media consumption. Larger platforms and programmatic campaigns cannot provide these types of insights but they are learnings that can be tremendously valuable in driving effectiveness on those platforms.

The old advertising 70/20/10 rule of thumb is based on the belief that 70% of advertising should be standard efforts already proven successful, 20% should be put toward new learnings and 10% dedicated to experimental innovation.

However, the next two years are not the time to maintain the status quo. Many historically successful advertising efforts will become less effective without cookies. Even Wall Street believes this, based on single-day declines in some ad tech stocks due to fears that less effective media buys would yield lower ad targeting revenue.

Third-party cookie loss will have little impact on social platforms as data can still be tied to user log-in information. Knowing that long-term social performance will remain fairly constant, media buyers should consider shifting a greater portion of short-term revenue to efforts that will generate insights and testing more experimental formats.

Back in 2014, media buyers realized that a huge portion of media purchased on the open web had poor viewability. Publishers have since focused on improving their site’s viewability, increasing the industry average to a whopping … 50%. In January, MOAT reported the average desktop viewability was 58%, while mobile web averaged nearly 55%.

Yes, after six years many publishers are still struggling with ad quality and passing that poor performance to unsuspecting marketers looking for greater scale of cookied audiences. The performance of open web programmatic ad buys will diminish with third-party cookie loss, but one quick way to combat that decline is to demand higher viewability rates.

The deprecation of third-party cookies is a huge shift in digital media that media buyers should not approach lightly. Rather than hold on to the scraps, media buyers should embrace the change and spend the next two years investing, testing and learning about their audiences. Cookie or not, this strategy will always yield long-term success.