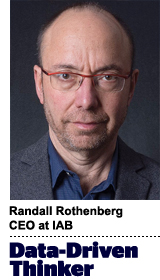 Last week Google sent shock waves across the industry when it announced it would phase out third-party cookies for Google Chrome over the next two years.

But from my vantage point, why so shocked?

There is no arguing that cookies have been extraordinarily valuable to the entire consumer economy. Studies show that the ad targeting they have powered has been worth more than $25 billion to the consumer economy by creating more efficiencies and allowing advertising to more effectively reach interested consumers. Say what you want about “those creepy ads that follow you around the internet,” but consumers undeniably buy based on those ads, and they have helped brands, publishers and intermediaries grow.

At the same time, Congress, the European Union, the California attorney general and other governments have said that the third-party digital economy cannot stand as-is. Consumer groups – some of which are pretty sophisticated about how the digital marketing and media supply chain works – have been urging them on and applauding.

There are two approaches to closing browsers and devices to third-party cookies. One is to simply slam the door without input from the businesses affected and leave them to deal with it ­– as Apple and Mozilla have done. The smarter, more productive path – the one that Microsoft and now Google are taking – is to seek input that helps drive the industry forward and aligns the interests of citizens, businesses and governments. It’s no secret which approach the IAB prefers.

Google’s announcement simply ratifies a reality that has been bearing down for several years in the marketing-media ecosystem. The company has done a good job involving the industry in a broader conversation and has been public for months about its thinking, so this announcement shouldn’t be a surprise.

Cookies are an imperfect technology that never should have been the backbone of personalized communications. But, most of the hysteria about cookies is overblown. We continue to worry – with evidence – that the death of cookies will make smaller publishers less competitive and drive more advertising to a small set of closed-loop, one-stop-shop platforms. The internet’s wealth of decentralized content will be harder for brands and retailers to take advantage of with a cookieless web.

However, it is now time to double-down and work together to create a safe, efficient supply chain that enables innovation and competition, and benefits consumers, businesses and economies alike.

Now is not the time for manifestos. Now is not the time to die on a hill defending third-party cookies. Now is the time for fixing the problem collectively. We must come to consensus and develop a solution so that the consumer and business benefits of personalization can be maintained and extended, without the attendant anxieties that make the current digital marketing supply chain unsustainable.

Major industry trade associations such as ANA, 4A’s, Network Advertising Initiative, IAB and the IAB Tech Lab have done this several times before, with the antifraud mechanism TAG, the privacy initiative Digital Advertising Alliance and soon with Privacy for America, a national privacy law.

This isn’t the end. This is a new and better beginning.