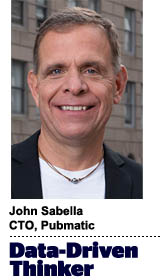 Today’s column is written by John Sabella, CTO at PubMatic.

As Google Chrome slowly dribbles out concepts for a cookieless future with little structure, many media buyers in the industry are getting restless to have a common solution that will be both privacy-compliant and standardized.

As a result, brands and leading advertiser coalitions including the ANA, 4A’s and IAB formed the Partnership for Responsible Addressable Media (PRAM) in early August.

The advertisers and advertising consortiums in the partnership want a standardized, privacy-compliant solution without relying on a huge company with its own motivations. This means that companies in the open web are going to be expected to adopt standards dictated by advertisers, not just Google.

Why advertisers must take the lead

Google wants to be out of the antitrust spotlight, but it also wants a beneficial cookie replacement solution, so it is slow playing its technology development while amping up its influence on so-called “third-party” decisions, such as the standards set by the W3C.

Google must prove to regulating bodies and global governments that its motivations are to solve for a direct cookie replacement that is fully privacy-compliant while also ensuring that it doesn’t appear to be acting monopolistically.

But it’s no guarantee that Google can thread that needle. The advent of PRAM should motivate the rest of us to move forward with other concepts.

Take Google’s recent “fenced frames” presentation to the W3C. This announcement could have created a contained space within the browser or page that would allow brands and publishers to transact in a privacy-safe environment without touching the rest of the elements on the page. Fenced frames should allow Google to step back from having to dictate many of the other elements of the solution, such as how to manage audience segmentation, verification and attribution.

Google could have created a safe and contained space where the specific ad tech, such as TURTLEDOVE, would operate. This would also be the space in which other parties that participate in ad tech could also run. This protected space could be the level playing field that would allow for the vibrant innovation that our ecosystem needs and could all support. But instead, fenced frames adds to many elements that Google would still have to solve for itself.  It’s merely the facility to display the ad payload from TURTLEDOVE, and it brings up its own issues. For example, it creates the need for special handling of video ads from unspecified certified servers.

The PRAM partnership announcement clearly states: “All browsers, devices and platforms should allow equal access, free from unreasonable interference, to the new solutions.” Advertisers must start working directly with vendors and publishers to form a viable industry solution, and the W3C is not likely to be the place for that work.

Already, Google has stacked the decks, with 27 members as of Sept. 1, which is about 10% of the voting total. And the W3C is a browser standards body, not an advertising consortium. We need to solve this in an arena where advertisers, who are spending the money, are playing a bigger role. Perhaps PRAM could be that place.

Time to make a sandbox for the open web

There are many other non-browser elements, such as first-party data, and alternative identity solutions, such as LiveRamp ATS and BritePool, that are emerging. We should encourage publishers to start testing, collecting and sharing signals such as contextual data that can be used as a proxy for audience targeting.

Email is too sensitive and fraught with privacy challenges. Better would be something like a unique logged-in screen name that publishers can collect and transact on. It would be more persistent than cookies and more privacy-safe than email.

Publisher first-party data consortiums that offer server-side targeting are a realistic future element in our ecosystem. Contextual targeting that comes from much richer content tagging – the way YouTube currency operates – is also a very valuable addition to targeting options. Contextual targeting also doesn’t need to rely on the browser at all and is inherently privacy safe.

To properly stress-test new concepts in the months and years ahead, we also need the patience and flexibility to embrace multiple signals at once in a way that we can compare and contrast them. This approach will also serve our industry well, as mobile will take the same trajectory when Apple sunsets IDFA.

Now the advertising side has started to speak out for standards that will work and are privacy-compliant, without being overly reliant on Google. We all must see the writing on the wall at this point: It’s really time to come up with solutions that are not based on the browser companies, and that can be standardized and shared across the open web.

After all, the W3C is only a browser standards body. And we should stop waiting with bated breath for Google to swoop in and save us.