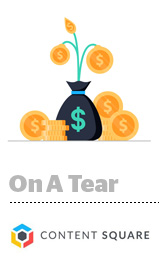 The fresh round, led by French private equity firm Eurazeo, brings the company’s total funding to $120 million since 2016.

This raise, like the last, is going toward research and development focused on AI and predictive analytics.

Contentsquare is different from services like Google Analytics or Adobe Analytics which show site and app activity, but not why visitors do what they do. The “why” is Contentsquare’s differentiator, said company CEO and founder Jonathan Cherki.

Contentsquare’s technology is designed to connect user behavior like cursor movement, zooms, clicks, hesitations, scrolls and hovers with business outcomes. From there, Contentsquare, whose clients include Walmart, Samsung, Sephora and IKEA, suggests actions to remedy problems or capitalize on opportunities.

But getting really good at that requires anticipating user actions.

“If you can predict what is going to happen, you can decide the right changes to make in terms of content and customer journey,” Cherki said.

In China, for example, people generally have to see between 15 and 20 images of a product before they buy. In the United States, that number drops to between three and five. In Germany, consumers actually read the terms and conditions on a website, while in the United States people don’t usually take the time. These are the sort of levers brands can pull to nudge visitors toward a conversion, he said.

Beyond R&D, Contentsquare, which already has offices in New York, London, San Francisco and Paris, is earmarking cash to expand into new markets, starting with Australia, Singapore, Hong Kong, China and Italy.

Throughout the year, Contentsquare also plans to add around 150 people to its current headcount of 320, primarily data scientists to staff its research lab and salespeople, as well as a few marketing and customer success folks.