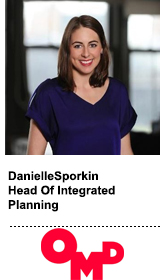 Content is increasingly available across platforms and devices, but most media agencies still take a channel-based approach to planning.

Linear and digital planners not only operate in silos, but the former use demographic data as their source of truth while the latter use behavioral data, creating a divide in both how agencies plan media and how people consume it.

So OMD is integrating its linear and digital planning teams and processes to better match consumer behavior. On Wednesday, it announced that it brought on Danielle Sporkin as head of integrated planning in the United States, a new role created to facilitate that union.

“Consumers have moved past agencies,” said OMD President George Manas in an interview. “Now we’re catching up by restructuring our planning teams, approach and tools to reflect the way that they are actually consuming media today.”

Sporkin’s hire and the launch of integrated planning at OMD is part of a broader modernization effort at the agency that began when Manas joined in April. OMD replaced its regional president roles with global client leaders to be more client-centric. It’s also updating its infrastructure and operations through automation and offshoring.

“Traditional planning processes are a series of handoffs,” Sporkin told AdExchanger. “How do we bring more people to the table upfront so they’re creating a plan with a strategic thread throughout?”

Integrated planning teams at OMD will work through Omni, the data platform from parent Omnicom that connects media planning and buying to a singular audience definition. Omni allows OMD planners to marry demographic and behavioral data upfront to get a more holistic view of where an audience spends its time across channels.

OMD recently partnered with VideoAmp to merge digital video, linear video, connected TV and OTT data streams within Omni for a more integrated view of the video landscape. At this year’s upfront, the agency combined linear and digital logs for a more consistent view of where to reach audiences across screens.

“Those rich insights that can be gleaned from digital sometimes are left too late in the process,” Sporkin said.

OMD’s goal is to flip the planning process so it’s based on the content people are consuming rather than where they’re consuming it. While that’s a significant mindset shift, especially for linear TV planners, the fundamentals of media planning remain unchanged, Sporkin said.

“There’s still a certain amount of reach and breakthrough you need, a certain frequency of the message that needs to occur,” she said. “Where we’re tweaking it is thinking about that not in channel silos but across all of content we want to reach our audience with.”

While most media agencies are integrating their investment practices, many are behind in doing the same on the planning side. “In our view that’s all moot unless you can construct strategies that deliver on cross media inclusive of traditional channels,” Manas said.

Where OMD has already gone to market with an integrated media plan, clients have achieved savings and seen greater media effectiveness, Manas added.

“By realigning our media plans to actual consumer behavior, we shake out inefficiencies,” he said.

Sporkin will also be responsible for recruiting from the 450 programmatic and analytics specialists that moved into OMD as part of a March reorg to bring those skill sets closer to client teams.

“We’re doing everything we can to break down the legacy silos that have slowed agencies down and prevented them from truly renovating their products,” Manas said. “Our hope is that we will pretty quickly shift the way work is getting done across the organization.”