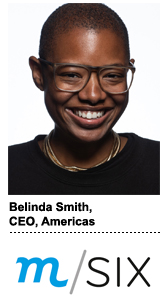 The brand client has become the agency CEO.

In mid-December, former Electronic Arts marketer Belinda Smith was appointed as CEO of the Americas at media agency m/SIX, a joint venture backed by The&Partnership and GroupM, and also one of EA’s external agency partners.

That’s how Smith met the crew at m/Six, where she’ll now oversee operations, strategy, growth and client development across the United States, Canada and Latin America.

Smith’s return to agency land – before EA, she spent a year as director of programmatic strategy at 360i – was prompted by a desire to evangelize what she learned on the brand side at a larger scale.

“I had the opportunity to do a ton of forward-thinking stuff at EA, things you don’t usually see brands leaning into – advanced modeling, the way we worked with the platforms, our own proprietary measurement systems and UA,” Smith said. “But I wanted to promote this type of work for a wider audience.”

In addition to the new role at m/SIX, Smith will also continue on as global diversity ambassador for the World Federation of Advertisers.

AdExchanger caught up with Smith.

AdExchanger: What do brands need the most help with right now?

At EA, we were able to see what we were doing from start to finish. We sold the product and we monitored the usage, which told a linear story from promotion all the way to NPS. There is a lot more that can be done in that arena to make sure brands are asking the right questions of their measurement systems and not tying measurement to media metrics, but rather to revenue growth, customer satisfaction or whatever metric is most important for that brand.

The other big thing is agency partnerships. When I was at EA, I was probably the No. 1 anti-in-housing in houser – because anyone who thinks that agencies are over is insane. That’s why EA appointed m/SIX, because they understand that the client/agency relationship is dynamic and evolving.

What does it mean to be an anti-in-housing in houser?

In-housing seems great … until the second year and then it’s like, what happened to all of the cost savings from Year One and why aren’t we moving as fast and why aren’t people working on Saturdays?

The problem is that in-housing got so sensationalized as “us vs. them” that people took a side without thinking it all the way through. You also don’t want to brand yourself as a separate entity, because if you position yourself as an agency, your coworkers will treat you like one, and you will not like that life.

How does that dynamic manifest itself?

It’s hard to say how much of this is COVID-related and how much might have happened anyway, but I’ve heard stories about people running in-house agencies at brands being squeezed financially. It’s an old trick for dealing with an agency in times of financial uncertainty, but it’s a little different when it’s your coworkers and they have to do more with less budget. You end up making decisions that burn people out a little bit. In some cases, in-house teams are even being put in a review where it’s them versus external agencies that are coming to call.

What’s the best way for an external agency to coexist with an in-house agency?

You need to spend time with clients and figure out what their media and creative needs are, but in a way that helps them win and make the case for media and marketing internally, which is a big thing we wanted to do at EA, to move away from being seen as a cost center or a service.

M/SIX is one of the agencies that pioneered having people co-locate with clients, so when in-housing took off, we were well positioned. Being set up to partner so deeply from our inception has been a real advantage, even during a time now when we’re mostly all remote working. Our people are ahead in terms of being able to anticipate the challenges that clients are facing.

A lot of band-aids got ripped off in 2020. How is the industry doing from a diversity perspective and what needs to happen next?

As CEO of the Americas, I have a big job caring for the business and thinking and growth and strategy in the region, but I’ll also keep focusing on diversity. One of the things I love about this role with m/SIX is that they’re keen on having me continue my work on D&I.

If you can crack internal diversity, including at the leadership level, it’s a huge unlock, because then you have someone who can start to create a more open and inclusive culture.

But the industry’s grade is terrible. If it used to be an F plus, maybe now it’s a D minus? In the past, the industry was too focused on representation numbers, including rolling that up to totals at the global level for an entire organization.

We’re seeing a backlash against that kind of thinking now, because you can game any metric. A representation number is no better than a CPM – neither tells us anything.

Are there any industry predictions for 2021 you’ve heard people trot out that make you want to roll your eyes into the back of your head?

If I came across a prediction story about automation, AR and blockchain as the next big things, I’d definitely roll my eyes. It’s like, have you been alive for the past nine months? Read the room, that’s not the vibe we’re on right now.