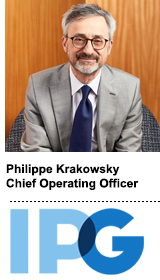 IPG revealed a series of changes to its executive suite on Monday that brings media leadership to the top of the organization.

The appointment of Krakowsky, a 17-year veteran of IPG, to COO suggests he could be in position to take over the top job from Roth. Roth, who is 73, has not yet made any public announcements related to his retirement.

But as CEO of Mediabrands, Krakowsky has been instrumental in crafting the global technology and data strategy that underpins the group. He also spearheaded the consolidation of specialist agencies Reprise, Ansible and Society in 2018, and led IPG’s $2.3 billion acquisition of Acxiom last year, its biggest strategic bet on data and technology to date.

“The technology strategy and vision inside of Mediabrands has been among Philippe’s most significant contributions,” said Jay Pattisall, principal analyst at Forrester. “His moving into this role tracks with the prominence of Mediabrands inside of IPG and the investments they have been making in technology.”

With Krakowsky as COO, IPG can extend Mediabrands’ and Acxiom’s vision around data and tech to the holding company’s digital and creative agencies. But the opportunity to integrate Acxiom across the organization will also be IPG’s biggest challenge, said Greg Paull, Principal at R3.“The challenge for IPG is to demonstrate to clients and prospects the true synergy of creative plus digital plus data,” he said. “One year into the acquisition, the jury is still out.”

Krakowsky, Lee and Kiernan are all from the media side of the business, an emphasis that “should not go unnoticed,” Pattisall said.

“Mediabrands has had an important contribution to IPG’s overall performance, and these moves are consistent with that,” he said. “These are the people that Michael Roth and the board feel can continue that performance and growth.”

“It’s worth all of us paying attention to that and anticipating where else we may see similar changes in other holding companies,” Pattisall said.