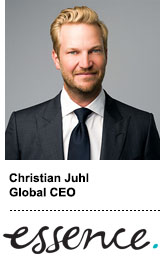 Now, Essence is working with all of the major TV networks to sell their inventory in a more addressable way, said CEO Christian Juhl.

“We’re trying to work with major publishers on changing the way they sell media,” he said. “But the things we're looking for will take some time.”

Essence, which grew up in the world of programmatic and digital, wants to apply principles of targeting and automation to the TV marketplace. But while its own clients understand the nuances of programmatic buying, much of the industry is still catching up.

“I am still surprised sometimes when we take new business meetings how programmatic is wildly misunderstood,” Juhl said.

In addition to its expansion into traditional media, Essence is working on making programmatic more efficient by using AI and machine learning to automate more administrative tasks.

But the industry is still grappling with trust issues around automated buying.

“Until people believe the impression they bought was seen by the person they wanted, with content that is authentic and real, that’s going to be a problem for digital advertising,” Juhl said.

CHRISTIAN JUHL: Progress has gone slower than I’d like. That’s not necessarily an Essence thing as much as an industry thing. [TV is] a very well-entrenched business. I think you’ll see more of the big suppliers moving fluidity and flexibility into their systems. They’re looking to bring addressability to a higher level.

We want to be able to spend on opportunities no matter what. If I can find pockets of opportunity across an entire network, why can’t I move my money there right away instead of getting locked into a specific show or time slot? If that doesn’t perform, I want to be able to move it. And my contracts aren’t always written that way.

How is Essence approaching advanced TV?

I want to own anything that’s going to be ad served at the end of the day. As OTT is able to do that, we want to play in that space. We work with GroupM on a larger level [because] you need to make a sizable investment and partnership in that space.

You can’t overlook what AT&T and Comcast are doing. The idea of content and mobile devices coming together in ways you can target is extremely attractive. We spend more time on this than anything else these days.

But privacy is a big trend. Congress supported these mega-mergers, but does that mean I can target on an individual basis? I don’t know. How will consumers react? I don't mind being targeted if there’s a fair value exchange, but I’m not entirely sure that’s worked out yet.

Essence won T-Mobile as a client last year. How do you work with them given that they do some media buying in-house?

We’re helping them with tools and processes around in-house search campaigns. That’s pretty typical for how Essence has been working: execution and technology provider in some channels, process coach in others. We’ve operated that way with Google for a long time, which in-houses a lot of their thinking and strategy.

What advancements can we expect in programmatic buying this year?

This will be the year where you see compression in what it takes to get campaigns up and optimized. We’ve taken a search campaign from 14 days down to about 10 minutes just by using machine learning and smart technology integrations. Copy generation, keyword lists and keyword grouping can all be automated. That will allow agencies to refocus on higher-value work and catch up on margin pressure we’ve felt from RFPs.

You’ll see more focus on developing goals people can target against. If we can test 15 different variables and isolate one based on performance, then I can optimize against that particular one.

What still needs to evolve in the programmatic ecosystem ?

Trust is a big deal still. Not just in programmatic but in measurement, third party-verification and audiences. You can go from fraud, bots and fake accounts into the gray area of what’s real and what’s not, what’s distasteful versus good-natured.

What about trust with agencies?

It’s still an ongoing issue. Agencies do a good job of being clear about what they're offering and what’s working and what’s not. They need to be very clear about where there are questions in the ecosystem. No one can promise 100% brand safety right now, so be open about that.

And they need to be very open about how they’re compensated. Nobody works for free. There are a variety of ways to get paid. All are okay at some level, as long as they’re disclosed.