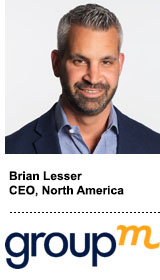 The yet-to-be-named firm drives a billion dollars in revenue and will be led by MEC CEO Tim Castree.

GroupM will also devote savings from the merger to expand digital agency Essence, which GroupM acquired in 2015, into a data-driven full-service media shop.

Lesser hopes Essence will be able to apply digital and addressable techniques to traditional media channels like TV, out of home and radio. Essence will leverage both mPlatform and proprietary platforms it has built with its flagship client, Google, to expand its services.

“We fundamentally believe that all channels will be addressable,” Lesser said.

As advertisers focus heavily on cutting costs, agencies are reengineering their business models to be more efficient. GroupM believes that going to market with three robust global media agency brands – MediaCom, Mindshare and the Maxus-MEC entity – backed by mPlatform, will bring those efficiencies to its offering for clients.

“We’ve signaled pretty aggressively that we want to simplify our organizational structures, make things more streamlined, get as many of our experts in planning, buying and digital as close to clients as possible and make it easy for clients to access our products and services,” Lesser said.

“Commoditization of services doesn’t help, with most global media agency networks indistinguishable to all but the most seasoned of practitioners,” said Pivotal Research analyst Brian Wieser in a note to investors about the MEC-Maxus merger.

In addition to having similar offerings, both Maxus and MEC have lost clients in the past year, such as Fiat Chrysler in Europe and Asia for the former and AT&T for the latter. GroupM hopes that merging them will minimize overlap and bring global scale.

“There is a trend toward consolidation, it is driven by the market and there’s no doubt that our clients are pushing us to be more simple, streamlined and efficient,” Lesser said. “This is a significant move in that direction for GroupM.”