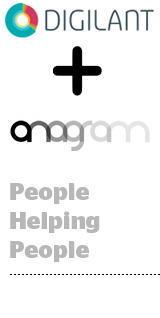 “Providing custom solutions is not just about technology,” said Digilant global CEO Alan Osetek. “Technology is only as good as the people who use it.”

Digilant declined to share a deal price other than to say that there was a payout upfront with an earnout to follow, but it’s clear this acquisition is about the talent.

Anagram was founded by Carat vet and former Hill Holliday Chief Digital Officer Adam Cahill in 2015 as an agency/consultancy hybrid that positioned itself as a helping hand for brands looking to dive into programmatic by building custom applications that didn’t leave creativity out in the cold.

Creativity often gets sidelined in programmatic media-buying world, said Cahill, who will join Digilant as president of digital in the US.

That raison d’etre fits nicely into what Digilant is looking to achieve, said Osetek, who noted that Digilant is moving away from IO-based buying toward a more integrated approach across paid, earned and owned, starting with programmatic as the core skill set.

Digilant is the paid arm of a trio of sister agencies, including Accesso, which handles owned media, and Antevenio, which manages earned. All three sit beneath ISP Digital, a holding company formed in 2014.

“We’re starting to see programmatic integrated into the overall media mix, including search and social, more and more,” Osetek said. “The fact is, clients don’t care about DSP buying or search or social – they care about reaching consumers efficiently and with the most possible impact.”

Cahill’s job is to guide that vision.

It’ll also be nice having more engineering power and resources behind him to build on new ideas, which wasn’t the case at a small shop like Anagram, he said.

As programmatic continues to grow, smaller brands and more mid-size indie agencies are entering the scene, and their needs vary. “There is no one-size-fits-all solution,” Osetek said.

Some will need help getting started and then they’ll take the reins from there, while others want a mixture of self-serve and a managed service. How much control an advertiser wants to take can differ campaign to campaign, as can the buying model and the preferred pricing model, whether that’s cost-per-click, cost-per-acquisition, cost-per lead or something else altogether. And then there’s the creative execution and optimization to consider.

Digilant works with roughly 40 agencies in the US, which constitute about 70% to 80% of its client base in that market.

“Overall, people still need a lot of help with this, and we want to demystify it and help increase their comfort level,” Cahill said. “That’s different from what the bigger platforms are doing. They don’t want to be in the services business, but we do, and we think people still need that.”

They also need transparency. That’s why Anagram would help its clients set up their own direct platform contracts, so they could see the fee structure firsthand. Digilant does the same for clients that request it.

“We’re about letting people work with us any way they want to,” said Cahill, who noted that Anagram is joining Digilant with around 40 active customers with ongoing monthly campaigns.

This isn’t the first time Cahill and Osetek have worked together. The duo were colleagues at media agency Vizeum, which was later acquired by Carat.

Anagram’s five employees will be absorbed into Digilant’s roughly 150. The ISP Digilant headcount with all three business units combined is about 650.

Unlike other ad tech firms which have been laying off staff recently, Digilant is in hiring mode.

Beyond acquiring indie agencies for the talent, Digilant is actively swelling its ranks. Digilant has grown headcount by around 13% over the past year, mainly with client services people, ad ops, data scientists and what Osetek called “data scientists light,” people who understand the data, but also know how to talk about it with the client.

That’s also where Anagram comes in.

“The core ingredients for success is having a strong ops team, both from a buying and an optimization standpoint and from a strategy and consulting standpoint,” Osetek said. “That’s why we bought Anagram and that’s how we’re hiring, to wrap ourselves around the client.”