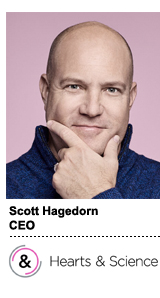 The only common currency for advertising is attention. And that’s where Hearts & Science CEO Scott Hagedorn is betting the farm.

“The common currency of reach is not legit,” he said. “Attention is a finite resource. It’s the one element that binds TV and digital.”

Hagedorn, a longtime Omnicom exec, is trying to help his clients better quantify and measure attention – a difficult feat in a fragmented market with major walled gardens.

Hagedorn is vocal about topics the industry shies away from. His personal passion point of late is app addiction and the industry’s role in funding platforms that are unhealthy for individuals and society.

“The platforms commercialized and monetized attention,” Hagedorn said. “They took money out of TV, but their platforms are not engineered like TV. They have a feedback loop that gets into some deeper psychological need. Inadvertently, as an industry, we funded platforms to be addictive.”

AdExchanger: What’s your biggest concern about how marketers spend on platforms?

SCOTT HAGEDORN: In these addictive experiences, an interstitial ad is getting in the way of self-actualization — or figuring out if you're popular. We need to figure out: What is the real commercial viability of advertising in those environments?

Fraud has moved to the top of the funnel. Identity hijacking has become huge. There are more fake Facebook and Twitter profiles than people in several pretty big countries. The scary thing is: We buy them. Those identities are active. They are sometimes promoting and messaging disinformation and chaos. There is a red thread back to advertising and marketing.

How can the industry reconcile this?

More people talking about it and auditing the paper trail of money. It’s an ugly thing to look at, and it’s a horrible thing to talk about, but it’s necessary.

There’s nothing more awkward than Mark Zuckerberg’s Senate [testimony]. If the government tries to regulate it, it will get it wrong. But if we can help advertisers vote with their dollars to influence the product design and experience, that would be helpful.

We also need to understand the accretive business value these platforms are driving. It’s not the same lean-back experience as TV. It’s similar to what we found with the brand adjacency problem on YouTube: You can drive reach but have the opposite effect. You can dissuade.

Reach is a concept that marketers understand. How do you change their thinking?

Step 1 is getting them switched on about identity and delivery. We shouldn’t be buying and funding hijacked identities.

Getting content- and format-aware is really important. The most dangerous thing [about] programmatic is that it divorced content from context. Most clients have lost the thread on where their content is delivered.

A [big] movement would be to stop advertising on social from 9:30pm to 6:30am, because that’s when people are loneliest. On TV, we don’t pay for overnights because that’s not the most the most effective time to be marketing.

Is there the same awareness on digital?

No. We should at least do a test to see: If we pull social [overnight] for six weeks, does it have a business impact? Is there an opportunity to create a societal impact? But the delivery has been obfuscated and opaque.

When the brand safety crisis happened, we did a six-week test that validated there was no business impact to being off [YouTube]. I ask clients, “Do you have enough intrinsic knowledge of what the real business impact is of any of this? Can you tease this out?”

Clients assume [platforms are] static like TV. But Facebook is not the same as it was three years ago. YouTube has morphed. Now it pre-rolls videos based on what it thinks you want to watch.

How are you helping your clients use better sources of data?

GDPR is going to make it more complicated. Tracking technologies are riding SDKs within apps, and most people are unaware they're being tracked — not only by an app but by six other people embedded into the app.

How much harder will that make measurement?

It’s going to get worse in the short term, and we’re going to have to overcompensate empirically. We have to figure out a way to start focusing on net attention on a cross-device basis and how to aggregate it.

It’s complicated. Platforms want to make it easy, but they’re conflating things. This is about a finite amount of attention captured.

How do you hold them accountable?

They are, to some degree, self-regulating. Apple and Google [announced] they were making changes to iOS and Android.

We’ve made product recommendations. Before the brand safety crisis, we didn’t have any visibility into URLs. There wasn’t an audit trail. This is where clients can vote with their dollars. There needs to be a mechanism between monetization, attention and productization.