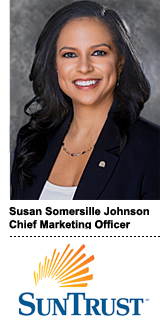 At least, when their city hosts the big game on Sunday, they won’t be forced to decide whether to root for the Saints – their hated division rival – or the New England Patriots, which dealt the hometown Falcons a brutal Super Bowl loss just two years ago.

So it’s in the spirit of celebration that Atlanta-based SunTrust Bank is launching a full-scale marketing experience across the city, which includes a football experience at SunTrust Park (the baseball stadium where the Atlanta Braves play), videos and signs throughout Hartsfield-Jackson Atlanta International Airport, a Snapchat filter and a Snapchat mural at The Battery Atlanta.

SunTrust has been a more conventional Super Bowl advertiser in the past. Two years ago, it paid big to air a commercial to introduce its “onUp” campaign about achieving financial stability. When SunTrust considered another Super Bowl spot this year, it decided to stay local – with the hope that earned media could help widen the campaign’s footprint, said CMO Susan Johnson.

“We wanted to focus on our efforts where we could get the most return,” Johnson told AdExchanger. “We’ve talked about analytics, where we could garner the most impressions and attention, and it was much more efficient and effective to focus on engaging the fans locally.”

When SunTrust launched “onUp,” it was a new brand message that needed a national platform. Two years later, SunTrust wants to also showcase its local and regional impact. For instance, it was the official bank of the host committee that brought the Super Bowl to Atlanta.

And while SunTrust operates nationally, its retail footprint spans the southeast US – where the next three Super Bowls will be held, Johnson noted. Naturally, SunTrust’s big metrics for this campaign will focus on awareness, brand consideration and brand recognition, particularly around the message of financial confidence.

Though SunTrust isn’t investing in a national spot this year, is a Super Bowl ad worth the price of admission?

“Oh, yes,” Johnson said. “While you can never, with 100% accuracy, tie marketing to results, we saw significant lift in brand consideration over that period, in revenue, in deposits, in loans – so bottom-line improvement. It had significant impact. That’s why we seriously considered doing it again. If [the Super Bowl] wasn’t in our home city, we probably would’ve.”

Of course, SunTrust isn’t the only advertiser tying its brand to the Super Bowl – far from it.

And these days, it seems that every brand has something to say, from Nike to Gillette.

Johnson is certainly aware of all the noise. She need only look out her window to see the brouhaha as advertisers converge in Atlanta for the Super Bowl.

“There’s a clutter of purpose-driven messages and cause messages,” she said. “We’re not too concerned with getting drowned out because we spent years integrating financial confidence into every touchpoint and everything we do.”