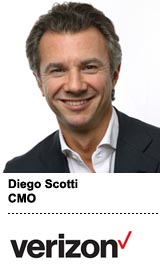 Like the New England Patriots, Verizon will pick up where it left off at last year’s Super Bowl.

Though in Verizon’s case, that means honoring first responders.

This year’s campaign is titled “The Team That Wouldn’t Be Here.” Verizon CMO Diego Scotti said the company will start rolling out spots two weeks before the big game.

“One of the things we realized is that there are lots of NFL players that wouldn’t be playing today if it wasn’t for first responders that saved them,” Scotti told AdExchanger at CES in Las Vegas.

Though Verizon’s Super Bowl story is a continuation of what it started in 2018, it’s revamped its social media strategy for the 2019 campaign. AdExchanger caught up with Scotti to talk about Verizon’s plans for Super Bowl Sunday and beyond.


DIEGO SCOTTI: We came back to the Super Bowl last year after seven years of not being there. I’m a firm believer that the Super Bowl is a great platform if you have something really good to say and a good story to tell. If not, why bother?

So what’s Verizon’s spot this year?

We wanted to really make a stand for the brand especially as it relates to our connection with first responders, which has been really strong for a long time. [At the 2018 Super Bowl] it was really, really successful. We were the second most talked about brand on social media after Pepsi, which sponsored the halftime show. This year we’re going to come back to continue that story.

When do you plan to roll out the campaign?

We are launching two weeks before the Super Bowl during playoffs. It’s a program that we call the “team that wouldn’t be here.” We’re going to tell 11 stories about the team that wouldn’t be here, telling their stories about how they were saved by first responders. We’re going to have a combination of 60-second spots, two minutes, all the way to a 30-minute documentary. Peter Berg, the director of “Friday Night Lights” and “Deepwater Horizon,” was the first person we thought of to help tell that story.

I always believed the best creative kinds of people are very passionate about whatever you need to tell stories about. So he’s developed all this creative with us and McCann, our agency, and I think it’s been a joy for that reason.

We’re launching TV ads, social, all of that stuff, throughout the next two weeks and then it’s going to culminate in the Super Bowl with a special spot that we’re not going to reveal until that day.

Is this a more ambitious social media strategy than in years past?

We are trying to be where our consumers are more and more. Although when people say, “Do you think print is dead? Do you think TV is dead?” It isn’t. We have our best engagement rates on a lot of channels because we focus on surrounding our consumer on the channels they’re already watching. People still watch television in different formats. It’s all about how you create a story that is then engaging people in the right way on the channels they’re viewing.

So what’s more ambitious than previous times is probably the different formats.

How are you looking to differentiate yourselves from competitors, not just in Super Bowl spots, but as a brand?

Yesterday, I was talking about this whole 5G thing, and how AT&T is calling 4G 5G, and it’s nonsense. T-Mobile did what they do well, they put out this little video of a phone that said 9G, it was pretty funny.

But we wrote a letter that is very detailed about how we define 5G. We’re running ads everywhere that say when we mean 5G, we mean 5G.

T-Mobile is great, it’s great they do what works for them. For us it’s about substance and integrity and we’re not going to play games. We want to have an emotional connection with customers that is based on the reliability that our brand is all about.

What are you going to be focused on in terms of marketing this year?

No. 1 is 5G. And we’re going to be partnering with a lot of companies, like Disney, NBA, and The New York Times, because 5G means nothing if there are no uses.

I would also say we’re going to continue to be very contrarian on the wireless and broadband business, specifically about how this category has become all about bombastic noises. We want to tell stories that are a little more profound.

How has workflow been after the reorganization?

Hans [Vestberg, Verizon CEO] is bringing in this reorg a formal organization to drive more collaboration. So the head of IT, the finance guy, the business marketing folks, we’re all at the same table having the tough conversations, the good conversations and it’s a lot of teamwork.

I enjoy it a lot because everybody’s going in the same direction and that’s the company that Hans wants to build.