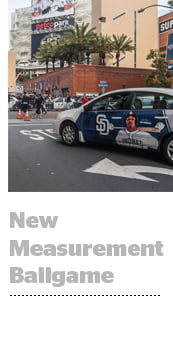 In the past, the Padres generally avoided OOH advertising, because the team doesn’t have an awareness problem in its local market, said SVP and CMO Wayne Partello.

Although the Padres do buy local radio and TV to drive conversions among more casual fans, over the last few years it’s shifted most of its attention to lower-funnel tactics, primarily digital.

But Partello loves to experiment, and this year he carved out a bit of budget to test Wrapify, a San Diego-based startup that pays drivers to sheathe their cars in branded vinyl graphics and drive around specific locations. Wrapify came in at No. 309 on Inc. Magazine's most recent revenue survey.

Partello was wooed in large part by Wrapify’s ability to tie ad exposure to stadium footfall, a perennial challenge for ticket sellers. For example, it’s common practice for one person to buy multiple tickets for a group of friends or family, which is great for filling seats, but less useful from a marketing standpoint, he said.

“We have people coming to games and having a great time, but no way to go back to track how they got there,” Partello said. “Being able to know who comes in contact with our advertising and whether they actually enter the ballpark is huge for us.”

Through partnerships with companies that aggregate deterministic mobile data, such as OOH analytics company Mira, Wrapify is able to capture opted-in mobile ad IDs of devices spotted near wrapped cars at specific times within geofenced areas. Mira has its own SDK and API integrations.

Wrapify then tracks to see when those devices show up within a second geofenced location, like Petco Park, for example, where the Padres play.

To eliminate the correlation-vs.-causation conundrum, Wrapify also creates a control group of mobile ad IDs that were never clocked within a 50-foot radius of a wrapped vehicle.

Beyond using this information to track stadium visitation, the Padres can connect offline exposure to site visits and online conversions and retarget people after they see a wrapped car in the wild. Wrapify has integrations with the Google Display Network and The Trade Desk.

“The idea is to bring measurement to something that has historically been seen as top-of-the-funnel brand marketing,” said James Heller, CEO and co-founder of Wrapify.

Recently, the Padres took car wraps for a spin in support of an effort to promote the team signing infielder Manny Machado to a 10-year $300 million contract. Snagging Machado was a big deal for a team with an eight-year losing streak that only won 66 games last year.

As part of the campaign, which ran in the lull between when the Machado contract was signed in February and opening day in late March, Partello ordered a fleet of cars with a giant picture of Manny’s face posted on the side to drive around San Diego.

Based on nearly 233,000 ad exposures – a sizable sample of San Diego’s overall population of roughly 1.4 million people – those who saw the ads were around 9.6 times more likely to visit the Padres stadium on a game day than people who weren’t exposed.

Based on these results, Partello has already extended the Padres’ contract with Wrapify twice and he’s planning to re-up again, he said.

“We always leave a little of our budget to test new things every year, and this is a really good example of that,” Partello said. “We want to be as efficient as possible, but we never want to get too set in our ways and miss an opportunity to try something new.”