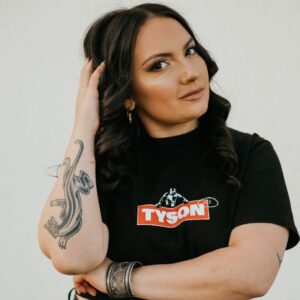 Jackie Guarini has a lot of experience marketing in regulated industries. She spent more than four years as a digital marketer at Anheuser-Busch, including as its head of commerce media.

But her new gig is a little different. In May, Guarini was appointed as the CMO of Mike Tyson’s cannabis company, Tyson 2.0.

Although cannabis is now legal in 38 states, marijuana products are still illegal at the federal level, which presents a unique challenge from a marketing perspective.

“I’m a lady that’s not afraid of a challenge,” Guarini said.

And hey, who knows, maybe lawmakers are on their way to giving weed a federal blessing. Senate Majority Leader Chuck Schumer introduced a bill on Thursday that would decriminalize marijuana on a federal basis.

AdExchanger: Mike Tyson is a celebrity, and cannabis is a hot category – so this isn’t your typical CPG startup. I assume that’s what makes it fun. But what challenges are you facing in the job?

JACKIE GUARINI: Cannabis is a semi-nascent industry compared with other CPG categories in terms of retail, merchandising, shopper marketing and ecommerce.

Cannabis is regulated state by state in terms of how you can and can’t sell to consumers, but that’s also what makes it exciting, because we’re just at the very beginning. For example, we’re doing a lot from a DTC perspective right now. 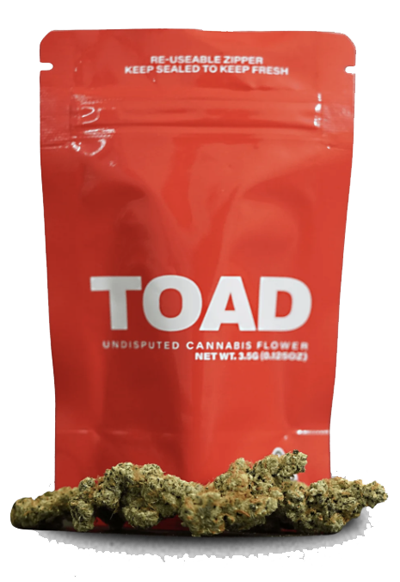 How are you approaching DTC and ecommerce?

We’re redesigning our website with a focus on California. Our plan is to nail down the California market before moving onto others, like Illinois or Michigan, because California is the state that’s setting the pace.

Delivery right now is limited to California, which makes it challenging to learn from other markets and unlock consumer habits and behaviors. So, in the meantime, since we can’t do DTC through our own website, we’re working with a few marketplace players so consumers can purchase our products at local dispensaries. And we have a strong paid media strategy for these marketplaces.

We have a lot of brand equity within our name: It’s a celebrity brand, but it’s also really important to drive trial with people who aren’t necessarily aware of our brand. Consumption really does help drive sales.

But don’t most if not all of the large social platforms still put restrictions on cannabis advertising?

In my career, I’ve been all about massive paid media campaigns where we’re spending millions of dollars on Meta, Pinterest, Snapchat, Twitter. But these platforms don’t allow cannabis advertising, so we’ve had to get really crafty.

If you don’t talk about or show your product in a certain way, you can kind of get away with it. We’ve, shall I say, cracked the code. For example, we figured out that you can’t really show the packaging, but what works really well is showing the beautiful terps and trichomes of the flower itself.

It’s interesting to me that you can have images of people smoking and you can show pictures of the flower, but you can’t display your packaging – which is a challenge, because I would love to put paid media behind social to show off our packaging. But I can’t, so we’ve had to pivot.

Right now, we’re focused on organic rather than paid on the platforms. And because Mike is such a huge name, we do have great organic content and a roster of big-time influencers in the cannabis industry, like Snoop Dogg.

But you do paid media through programmatic partners, right?

Our chairman and co-founder is Chad Bronstein, the CEO of Fyllo, which is a cannabis data platform. I first worked with them at Anheuser-Busch when I was looking for new progressive audiences, like cannabis purchasers or NFT buyers. Those audiences drove tremendous ROI for me.

But it’s also a full-stack solution with compliance software and a managed service for media buying. This is complicated, and I don’t want to work with multiple agencies and have multiple buys where budgets get missed or aren’t tracked. We want one partner to handle programmatic.

What has to happen before the big social platforms ease up on cannabis advertising?

The reason they don’t allow it is because cannabis is federally illegal, which is different from, say, alcohol. But it’s also not easy for alcohol brands. Ads get kicked back all the time. I know about that firsthand.

What will be interesting to see is what they do as more and more states legalize. Maybe they’ll get more lenient about the packaging; maybe they’ll do engineering work on the backend to help with compliance. But if they don’t do something, it’ll be a huge revenue loss for them, because this industry is going to boom and get a ton more capital backing.

We just closed our Series A in June.

What role does merchandise play in your marketing strategy?

There are a lot of pockets of opportunity outside of cannabis. We have CBD, hoodies, T-shirts, lighters, keychains, rolling trays, and eventually we’ll have shoes, socks, ashtrays, you name it. These are all things I can promote on Meta, Snapchat, Pinterest, everywhere, as a way to get people more interested in and engaged with our brand without breaking any rules. 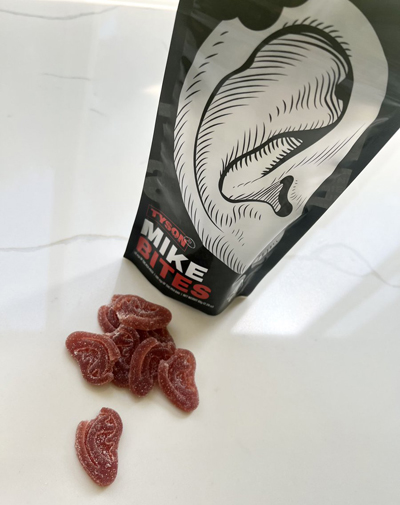 What about those ear-shaped cannabis gummies with a little bite missing you guys were selling earlier this year?

Now we’re also talking about chocolates, we’re talking about lollipops. But yes, Mike Bites was a huge viral moment for us. It was the perfect combination of marketing and product innovation mixed with nostalgic moments that bring joy to people.

Evander and Mike still talk, and they’re friendly with each other. Bygones are bygones at this point. We just hit the 25th anniversary of that fight. Everyone was on board with the gummies. Otherwise we would never have done it.

As the CMO, do you have to address Mike Tyson’s personal past?

But I do believe that he’s done his time and I don’t take a personal stance on Mike’s past. I’m here to build this brand and to build the cannabis community. I’m also here to be a female in this industry and to pave the way. I know Mike personally and I can tell you from the time I’ve spent with him that he’s a sweet and changed person, and I’m a person that believes that anyone can change as long as they’re willing.

I think I know the answer to this, but are women underrepresented in the cannabis industry?

There are a few amazing female-led brands out there creating fun women-marketed products, like cannabis bath bombs and high-end luxury consumption devices, which I’m a big fan of. And in the short time I’ve been in this industry I’ve been met with love, kindness and a let’s-stick-together mentality I’ve not had before in my corporate career.

But being a woman in this role is a big deal in a very male-dominated space, and I’m excited to be part of what I think is a revolution in this industry. I’m here to break shit. Let’s do something different.