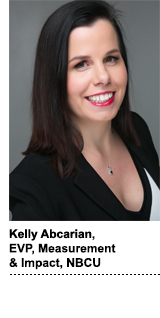 “Gone are the days of three networks, one screen, one ad and one way to count,” says Kelly Abcarian, EVP of measurement and impact at NBCUniversal, on this week’s episode.

Abcarian joined NBCU last year after more than 16 years with Nielsen, most recently as its GM and head of product for advanced video advertising.

But the opportunity to join a broadcaster that reaches nearly 700 million people globally across all of its platforms every month was too good to pass up, she says.

And Abcarian hit the ground running.

Not long after her arrival, NBCU issued an RFP looking for measurement alternatives to the status quo. NBCU selected iSpot as its first partner in January and, earlier this month, anointed six others to help with audience measurement and verification, including Comscore, DoubleVerify, IAS, Oracle’s Moat, Innovid, Conviva and FreeWheel, which is owned by NBCU’s parent company Comcast.

NBCU also plans to use iSpot as its national currency for ad buys at this year’s upfronts.

Buyers “need to be able to see it all,” Abcarian says, which is why NBCU issued a broad RFP that went beyond transactional categories to also include audience measurement and verification.

“Marketers don’t buy ratings; they buy results,” she says, and they “want to understand results across the entire purchase funnel.”

Also in this episode: NBCU’s Peacock plans, why Abcarian isn’t a cord cutter and thinks terms like “cord cutter” are too reductive. Plus, the guilty-pleasure program that’s on her DVR.