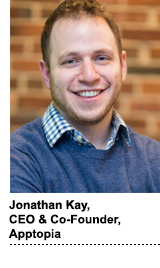 Given the ubiquity of apps, mobile behavior has become synonymous with consumer behavior. App download and usage trend data can tell a very human story.

Take the war in Ukraine. In February, for example, during the early days of the Russian invasion, app store intelligence platform Apptopia found a marked uptick in the number of Ukrainians downloading and using offline mapping apps and encrypted communications apps.

Apptopia has also noticed that the use of VPN apps in Russia is up more than 1,000% since the war started.

On the surface, this usage behavior suggests that people in the country don’t want to be censored. But data always needs to be contextualized.

It’s possible that many Russians are using VPNs because they’re addicted to their favorite social apps or they want to watch Netflix, muses Apptopia’s CEO and co-founder, Jonathan Kay. The Russian government recently banned both Facebook and Instagram for being “extremist,” and Netflix pulled out of Russia in early March.

Since Apptopia was founded roughly a decade ago, more than 120,000 apps have shared their app analytics accounts with the company in exchange for competitive analysis. Apptopia’s algorithm matches the real-time data that flows in from those apps with metadata and publicly available data to surface usage trends.

Even brands that are highly sophisticated from a digital perspective often don’t have a good sense of how anything beyond their own properties is performing.

“They have very little understanding of what is happening outside their four walls,” Kay says.

Also in this episode: Winning business by sending prospects chocolate-covered grasshoppers in the mail (Kay did that at a previous job), how Trump’s Truth Social is really doing (not great), did those crypto ads during the Super Bowl actually work (maybe) and tips on where to hang out in Boston (head over to the Back Bay for some good people watching).