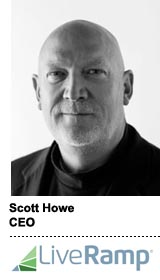 Industry Preview is a special, limited-run audio series, featuring interviews with key leaders in marketing, media and technology who share their predictions and key priorities for 2021. This podcast is sponsored by IBM Watson Advertising.

LiveRamp CEO Scott Howe has a unique view of the advertising industry’s crossroads.

The company is one of the key tech firms zeroing in on the reinvention of online identity, and how it will impact advertisers and publishers. Moreover, a lot of this innovation is happening at a time when publishers are hyper-aware of the ways their data is used. And with numerous legislative efforts worldwide designed to regulate data use, the tides are constantly shifting.

But despite all of this volatility, the biggest shakeup will come from the upcoming deprecation of third-party cookies in Chrome. And despite lawsuits from state Attorneys General and the DoJ, Howe is betting that that disruption is inevitable.

“When I talk to clients and publishers, there’s a group that wants to stick their head in the sand and say it’s not going to happen, or that anti-trust issues will push out the date,” he says. “Then there’s a group that’s realistic and recognizes that the timing might shift, or the policies might shift, but some profound truths are emerging, which is that there’s been a long term trend toward consumer transparency, which isn’t going away.”

Howe also addresses the publisher community, which now must reinvent how advertisers can message their audiences. At the same time, publishers have an opportunity to reclaim the direct relationships with their readers they lost as ad tech middlemen grabbed their slice of advertising dollars.


“The best advice I can give [publishers] is that for 20 years, they’ve been fighting on an un-level playing field because others have owned their audience,” Howe says, emphasizing the importance of regaining control.

During this interview, conducted shortly after the US Capitol riots but before the inauguration of President Biden, Howe was also meditative about the role platforms play in being a bullhorn for all types of messaging.

“The government has the responsibility to set the rules of the road, and the platforms have a responsibility to set their policies and protect consumers and businesses,” he says. “Government and industry have to work together, but they have to be clear up front and can’t change the rules as they go along, or that creates frustration, anger, and the very situation that we’ve seen in recent weeks.”