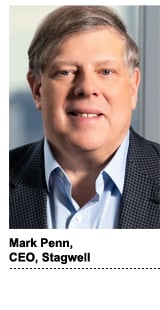 Now that the drama has died down around the merger process between The Stagwell Group and MDC Partners – the two finally became one in August – Stagwell, as the new entity is being called, has its eye on cracking into media.

The Stagwell Media Network was born in August as the combination of eight agencies in the group, including Media Kitchen, GALE, Grason, Assembly and ForwardPMX (the latter two of which were combined into a single agency in mid-September).

Together, the media agencies in Stagwell’s network manage nearly $5 billion in spend, says CEO Mark Penn on this week’s episode.

Media was “one area where we really needed to put things together,” Penn says, noting that the individual agency brands are still pitching their own business.

“But together, we can go out and win some very significant media contracts,” he says. “Because of our combination of creative and data … some accounts that might have gone to a creative-only agency want much closer synchronization with media and targeting.”

Which is a little ironic, considering all the effort that the marketing procurement folks have put into scouring the supply chain.

“What procurement spent a decade separating,” Penn says, “many clients are looking to put back together again.”

Also in this episode: What the name “Stagwell” refers to (it’s not a person); cross-agency collaboration; what it means to be a “challenger holding company” and what the heck it even means to be a holding company at all anymore. Plus: Penn’s secret love of esoteric cartography and its unlikely connection to marketing.