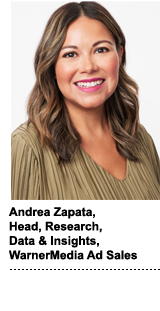 With Nielsen on its heels, programmers, including WarnerMedia, ViacomCBS and NBCU, have started taking measurement matters into their own hands.

In January, WarnerMedia announced a short list of new measurement partners after executing a major review last autumn. VideoAmp, iSpot and Comscore made the cut. WarnerMedia will use the trio to test alternative currencies of TV ad performance for counting audiences across platforms.

Andrea Zapata, head of research, data and insights at WarnerMedia Ad Sales, and this week’s guest on the podcast, was directly involved in running the review, which was triggered by the news in September that Nielsen undercounted TV viewership during the pandemic, leading to the loss of its MRC accreditation for local and national TV ratings.

But long before these specific revelations, broadcasters thirsted for fresh measurement methods.

Nielsen has always “had a challenge with counting appropriately,” Zapata says, “and I know that the industry as a whole has been pushing for better ways.”

It’s high time, she says, to move beyond focusing on linear to thinking about cross-screen, including deduping audiences and weaving first-party data and big data into measurement methodologies.

“We have the ability to start moving to more data-driven approaches, audience-based approaches and, ultimately, to demonstrate outcomes,” Zapata says. “The shift from linear to connected television, over-the-top plus mobile has become an opportunity to [ask], ‘How do we want to count?’”

Also in this episode: A deep dive on why WarnerMedia selected iSpot, VideoAmp and Comscore, Zapata’s take on Nielsen ONE (“They’re not there yet, and that’s really the ‘it’ of it”) and what’s on her streaming must-see watch list right now.