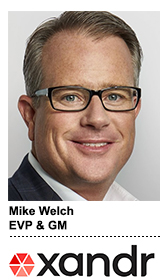 It’s been a kind of a downer week for telco-owned ad platforms.

The theory was that overlaying ad impressions with telco data would drive prices higher. But it was harder than it looked and now many of those deals are being undone. With Verizon Media’s sale to Apollo and Tapad’s spinoff from Telenor, is the dream dead?

Not yet! At least not at AT&T’s Xandr unit.

On AdExchanger Talks this week, Xandr GM and EVP Mike Welch discusses the Verizon situation and makes the case for AT&T’s ongoing opportunity.

Welch points to the fact that the ad tech space is enjoying a wave of investor enthusiasm which has led to new growth vectors.

“The ad tech market is really hot right now,” Welch says. “There’s a lot of value being created, whether that’s consolidation like what Magnite has done, whether it’s IPO like what PubMatic has done. You’ve got Verizon going to private equity, yet another flavor.”

“We recognize the strength and uniqueness of the assets we have,” he adds. “We’re committed to being a player in this space for a long time.”

As with many other ad platforms, Xandr’s product roadmap is all about CTV. Welch shares numbers suggesting that Xandr’s growth in this category is real.

When AT&T acquired AppNexus in 2018, video formats represented only about 13% of all spend on its platform. Today, video represents 35% of Xandr inventory and may reach 50% this year, surpassing display. If you ignore YouTube, which can only be bought through Google, Welch says Xandr will soon have 20% share of CTV programmatic spend.

“We’ve seen really fast growth in CTV,” he says. “If all you remember is AppNexus as a display platform – no, we are a video first platform now.”